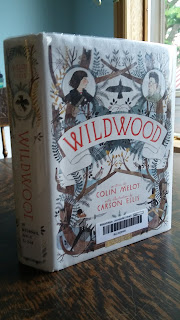 
For fans of The Chronicles of Narnia comes the first book in the Wildwood Chronicles, the New York Times bestselling fantasy adventure series by Colin Meloy, lead singer of the Decemberists, and Carson Ellis, acclaimed illustrator of The Mysterious Benedict Society.

In Wildwood, Prue and her friend Curtis uncover a secret world in the midst of violent upheaval—a world full of warring creatures, peaceable mystics, and powerful figures with the darkest intentions. And what begins as a rescue mission becomes something much greater as the two friends find themselves entwined in a struggle for the very freedom of this wilderness. A wilderness the locals call Wildwood.

Wildwood captivates readers with the wonder and thrill of a secret world within the landscape of a modern city. It feels at once firmly steeped in the classics of children's literature and completely fresh at the same time. The story is told from multiple points of view, and the book features more than eighty illustrations, including six full-color plates, making this an absolutely gorgeous object.

This book was a bit different. It was compared to The Chronicles of Narnia, which I have not read, but I thought it sounded and looked pretty interesting because of that comparison. It is apparently aimed at a middle-grade age group, but could definitely be read and enjoyed by anyone. In fact, I am not ashamed to admit that there were at least two words in this book that I was not familiar with. If this was going to be read by a middle-grader I think I would recommend a read-along with an adult just for the vocabulary, and also there is a semi-intense fight scene near the end which I considered a smidge violent, keeping the target audience's age group in mind. Parents should be mindful of that and the sensitivities of their child before reading.
I did find most of the book slow and a bit (I hesitate to say...) boring... :/ Character development was a bit lacking as well. I liked the characters well enough, but you don't necessarily feel invested in their stories.
And I see from Goodreads that I'm not the only one to have that opinion. However, I loved the premise of the story, and the world inside the forest was really interesting, and there were fun parts, so I still rated high. Overall, I enjoyed the story and the adventure, it's just that the delivery left a bit to be desired. Also, it is a massive book for this age group... just saying.
I believe there are two other books, and I look forward to borrowing and reading them at some point as well. I'm interested to see what will happen, if we'll see the same characters again, or if new characters will be introduced. I also think this would make a great movie, very similar to Narnia.
Carson Ellis, the illustrator, also illustrated The Mysterious Benedict Society, which are some of my favourite middle-grade books! So the illustrations were definitely reminiscent of those books, but even without the illustrations, the book did have a similar feel to the Benedict Society books.
My Goodreads rating: