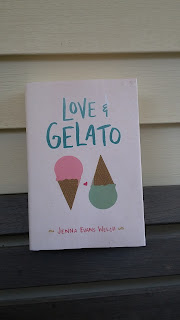 “I made the wrong choice.”

Lina is spending the summer in Tuscany, but she isn’t in the mood for Italy’s famous sunshine and fairy-tale landscape. She’s only there because it was her mother’s dying wish that she get to know her father. But what kind of father isn’t around for sixteen years? All Lina wants to do is get back home.

But then she is given a journal that her mom had kept when she lived in Italy. Suddenly Lina’s uncovering a magical world of secret romances, art, and hidden bakeries. A world that inspires Lina, along with the ever-so-charming Ren, to follow in her mother’s footsteps and unearth a secret that has been kept for far too long. It’s a secret that will change everything she knew about her mother, her father—and even herself.

People come to Italy for love and gelato, someone tells her, but sometimes they discover much more.

Review:
I don't typically enjoy contemporary YA romance because I generally find them to be cloying and unrealistic. This was probably still unrealistic, and definitely cutesy, but for whatever reason, it wasn't too much for me and I was able to enjoy it.

I personally found it equally sad and happy. The story follows Lina's summer adventure to Tuscany, Italy from America, following her mother's death. It was Hadley's dying wish that Lina would go to Italy to get to know her father, Howard, whom she has never met. Lina's journey has a rough start, but she quickly makes some new friends and discovers Italy and all the wonders it has to behold - especially gelato!

Upon her arrival, Lina is given her mother's journal, which had been sent to Italy before she died. The inscription inside the front cover, "I made the wrong choice" prompts Lina to read it to find out more about this choice her mother made which she regretted, and to try to figure out what her mother saw in Howard.

Through the course of the book, Lina uncovers her mother's secrets, gets to know Howard, and falls in love - both with the city, and with the boy who shows it to her. It's a bittersweet feeling as we simultaneously watch Lina and her mother (through the journal) fall in love, and then learn the truths that change everything.

(Possible spoiler warning for this paragraph)
There's an air of mystery around Howard and Hadley's relationship that made me want to keep reading to know more. The friendship between Lina and Ren is sweet, and it was both frustrating and cute to watch them struggle with their feelings for each other. I really loved all the characters, but Lina and Howard were my favourites.

I gave this book 5 stars because it made me feel a range of emotions and I didn't want it to end. I would absolutely recommend this book to anyone who enjoys contemporary YA and romance.

I have always wanted to go to Italy, the language and culture has always intrigued me. But the descriptions in this book, of various landmarks and famous places, just made me want to go all the more! My best friend and I are tentatively planning a trip to Europe in 5 years (for our 35th birthdays!), so if that ends up happening, Italy will definitely be in the running for possible destinations!
My Goodreads rating: