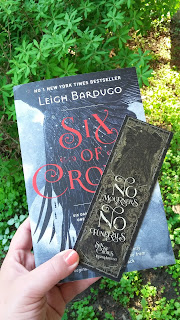 Six of Crows
by Leigh Bardugo

Criminal prodigy Kaz Brekker has been offered wealth beyond his wildest dreams. But to claim it, he'll have to pull off a seemingly impossible heist:

Break into the notorious Ice Court

(a military stronghold that has never been breached)
Retrieve a hostage

Kaz needs a crew desperate enough to take on this suicide mission and dangerous enough to get the job done - and he knows exactly who: six of the deadliest outcasts the city has to offer. Together, they just might be unstoppable - if they don't kill each other first.

Review:
Ok, this book... I had heard such good things about, I was just expecting to be in love with it from the start. I wasn't. "It picks up after about 100 pages," they said. "Give it a chance," they said.

Admittedly, things did start to pick up right around 100 pages, and admittedly, it was pretty good in the end. But I was seriously struggling at the beginning. I would say the first three-quarters of the book was super boring and uninteresting to me. In the last quarter was where most of the action happened, where some exciting stuff started happening, and you're left needing to read the sequel, because hello?

After a while, I liked the characters. I identified most with Nina, I think, which is also perhaps why I was more interested in the ending. Inej was also a favourite. I didn't care for the male characters because I found it really difficult to come to terms with the fact that they're all teenagers. These boys - especially Kaz - didn't feel like boys to me, so every time she said one of them was 19 or something, it totally threw me. Nina seemed older than her age as well, but I was able to accept it. Inej and Wylan were the only characters who I felt fit their age.

I enjoyed the Mission Impossible aspect, once it got underway, and I like how they kept facing obstacles, like even though they had this detailed plan, it didn't go down like that.

I wish there had been a bit more explanation about the Grishas and their powers, but I guess there's a whole other series about that, so maybe at some point I will read those.

Like I said, in the end, I liked the story, and I am looking forward to reading the sequel, Crooked Kingdom, when I have the time. I would recommend it, but with the warning that you might not love it for even the first half, but it definitely gets better after that point.