Hey guys! This is actually a combined review post, because the only pic I had on hand of A Darker Shade of Magic was with my new book sleeve (haha!). I pre-ordered this sleeve on Etsy from a Canadian seller (gotta support small Canadian businesses!) called Green Leaf Baby, and it arrived a couple weeks ago. It doesn't seem to be a product that she normally sells, but I really like mine, and I would definitely request another one from her in the future.

This one is made with an adorable Harry Potter print. It has these cutesy images of the four house mascots (lion, badger, snake, bird) and little wands doing spells. It's super cute! The lining is made of a soft grey minky material - so soft!

My only "issue," if you can call it that, is that I kind of think that book sleeves should have some sort of closure (zipper, Velcro, a button...) just to make sure the book doesn't slide out, especially with that super soft lining. This sleeve is big enough for all the books I've put in it so far, it's even a bit roomy (hence the need for some sort of closure). 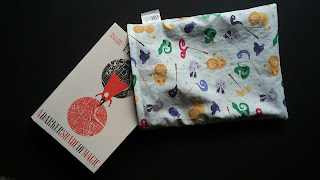 A Darker Shade of Magic
by V.E. Schwab


Kell is one of the last Antari—magicians with a rare, coveted ability to travel between parallel Londons; Red, Grey, White, and, once upon a time, Black.

Kell was raised in Arnes—Red London—and officially serves the Maresh Empire as an ambassador, traveling between the frequent bloody regime changes in White London and the court of George III in the dullest of Londons, the one without any magic left to see.

Unofficially, Kell is a smuggler, servicing people willing to pay for even the smallest glimpses of a world they'll never see. It's a defiant hobby with dangerous consequences, which Kell is now seeing firsthand.

After an exchange goes awry, Kell escapes to Grey London and runs into Delilah Bard, a cut-purse with lofty aspirations. She first robs him, then saves him from a deadly enemy, and finally forces Kell to spirit her to another world for a proper adventure.

Now perilous magic is afoot, and treachery lurks at every turn. To save all of the worlds, they'll first need to stay alive.

I seem to start all my reviews the same way, but how many ways are there of saying, "I really enjoyed the book" or "This was a really good book"...?

I was excited to read this book. I've been hearing (good) things about it for over a year. It was the book featured in OwlCrate's first box (which was several months before I started subscribing). When it was chosen in one of my Facebook groups as the book to read and discuss for June, I was super excited! I kind of missed the discussion that happened, but anyway... I'm so glad I read the book.

I did find the story a tad slow at times, but I was never uninterested in what was happening, or in the characters. I really liked the character development - I loved the protagonists and hated the villains, as one is expected to do. I felt like I was supposed to like Rhy's character, because everyone loves him, but I really didn't. There's just something off about him. When he was flirting with Lila, my skin crawled. Ew. Just, no.

I totally fell in love with Kell, and I feel no need to explain or justify that. I wonder if anyone else would agree with me on this, but I felt a pretty strong Newt Scamander vibe (as portrayed by Eddie Redmayne in Fantastic Beasts and Where to Find Them) from Kell. He just has that same tall, lanky, kind of shy thing going on, the magical aspect, the smuggling, plus his coat... Newt's coat wasn't as magical or as significant to the story as Kell's, but it's iconic of him, and that's what I kept thinking of when I imagined Kell and his coat. In fact, I'm pretty sure Eddie Redmayne would be a good Kell... There is a Darker Shade of Magic movie in the works, by the way, so that's pretty exciting! :D

In my Goodreads review, I mentioned that I wanted to be Lila when I grow up: Lila is one of those characters (spunky, full of life, knows what she wants and how to get it, etc) that is the polar opposite of myself and just makes me wish I could be more confident and adventurous like her. Granted, she didn't have any real attachments to begin with, but when she packed up everything and ran off with Kell to a foreign world - not even knowing if the magic would take her - I just wish I could be so brave.
*sigh*

Anyway... I think there might have been something else I wanted to say, but I waited too long between writing sessions, and I forgot. Typical. So, suffice it to say that I really enjoyed this book, I highly recommend it, and I am looking forward to reading the sequels soon! :)