Hey guys! If you read my last unboxing post (November "Wonderland" OwlCrate), you will remember that I received a free OwlCrate in November after winning one of the photo challenges on Instagram, and so because I was getting a free OwlCrate box, I decided to treat myself to the November Wizarding World by LootCrate. As you may or may not know, that first crate sold out very quickly, but then they did a second batch, which I managed to get in on, that wouldn't be shipped until December. I was fine with that, it would be like a Christmas gift from me to me. As it turns out, this box arrived on the 23rd, and I didn't get my December OwlCrate until the 29th, so I'm really glad that I went ahead and got this one. It's quite a bit more than OwlCrate, but it is bi-monthly, and there's no book included in these boxes, just loot. I considered only getting the one box (because of the cost), but after seeing the contents, I'm definitely going to keep going as long as funds will allow.

So, on the the unboxing! The theme (as I understood it) of this first ever J.K. Rowling's Wizarding World box by LootCrate was Fantastic Beasts & Where to Find Them, in honour of the movie's release that month (which, by the way, was amazing! I loved it, I'm so excited that there are 4 more to come, and I can't wait to see where the story goes!). The box is really cool, it's black with the logo on the top, and what looks like a suitcase lock on the side. Mine was a little damaged from it's long journey, as you can see, but everything inside was fine. 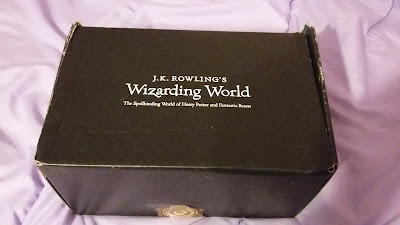 When you open the box, the inside cover graphic is awesome! It's dark teal and says "I want to be a wizard," and it makes me very happy.The first item at the top of the box was this sweet t-shirt! It's black, with the front page of a New York wizard newspaper "The New York Ghost" - it's really cool, I like it a lot. 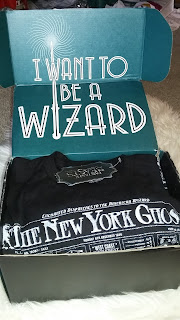 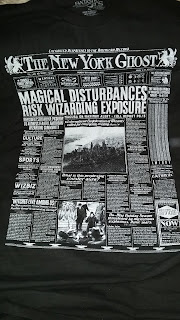 The next item was this Pigwidgeon stuffed animal. He's kind of cute, but... not sure I have a use (or a desire) for a stuffed Pigwidgeon. :) It's also super soft. 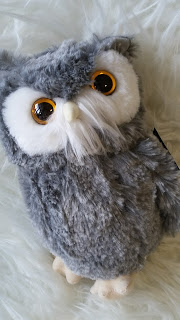 Next item was a Harry Potter keychain. It's really big and bulky, so it's not something I think I would actually use as a keychain, but it's kind of neat. There is a black leather tassel, a metal Hedwig in flight, and a metal Hogwarts letter. 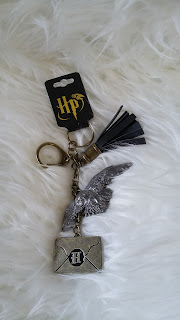 The next item I pulled out of the box was a Fantastic Beasts lapel pin. It is the Bowtruckle from the movie, in Newt's shirt pocket. Again, cute, but a bit bigger than I'd like. But it's a pin, so I think I'll be keeping that one for now. 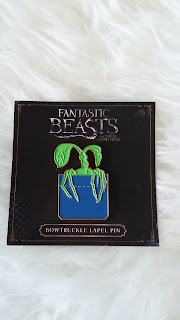 There was also a Funko Pop! figure, which I was pretty excited about! There were a few possibilities (either characters from the new Fantastic Beasts movie, or Dumbledore). I got Dumbledore, which I was happy with because I didn't already have him, but then my brother ended up giving him to me for Christmas, so now I have a double which is up for trade (any takers??). 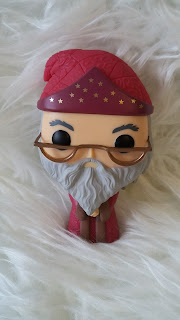 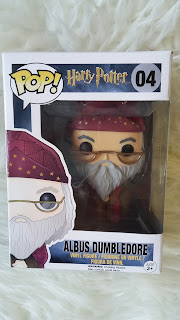 And last, but not least, there was this very cool "MACUSA" (Magical Congress of the United States of America, also from the Fantastic Beasts movie) embossed, gilded, leather-bound journal/notebook at the very bottom of the box. I really love the detail on the inside back cover; it shows a map of the USA with little blue dots here and there, and it's labeled "real-time hex indicator." 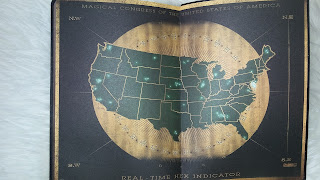 So, overall, awesome box. I think the items reflect the theme very well, it's a nice variety of items, and I feel like I got my money's worth. It's not necessarily all items that I love or will use, but that's completely my own personal preference. As far as the quality of the items and the overall box goes, I think they've done a great job, and I'm really happy with it! 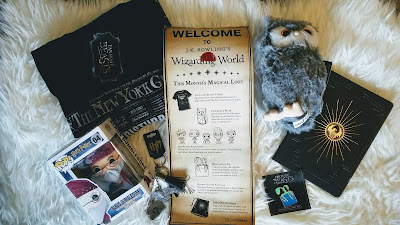 The next Wizarding World box will be sent in January, and the theme is "A Matter of Time," which I am pretty excited about! Some people were speculating that there might be a Time Turner necklace included - I must admit that I would be very happy if that were the case! But I guess we shall have to wait to see...!

Did you get to see Fantastic Beasts and Where to Find Them? Were you able to get in on the Wizarding World LootCrate? What did you think of it?
Posted by Anne-Marie at 11:25 AM