Continuing with my review of the books I read in 2016 (I promise I will try to wrap these up soon and do better with 2017's reads!!), here is part 2 of the Harry Potter series (read my Part 1 review here), covering the last 4 books. Be warned that there may be spoilers! (The images below are borrowed from Google Images, and these are the versions which I own and read. Someday I hope I'll be able to complete the series with the new covers!) 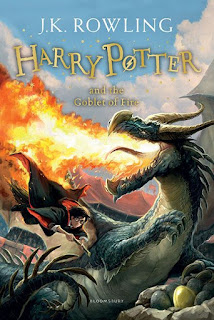 Harry Potter & the Goblet of Fire
In this book we experience the first death in the series. Not a beloved character we've known from the beginning (thankfully), but a shocking (and perhaps unnecessary?) death all the same. Now in their 4th year at Hogwarts, Harry, Ron, and Hermione learn that Hogwarts will be hosting the Tri-Wizard Tournament (this after attending a Quidditch championship game over the summer), which had not taken place in some 200+ years because there had been too many deaths. It is a contest between the 3 main European wizarding schools: Hogwarts, Durmstrang, and Beauxbatons (so we are introduced to these 2 other schools and their headmasters), and is composed of three tasks, each more dangerous than the one before. In an effort to keep it safer, Dumbledore ruled that only those aged 17+ could enter their name into the Goblet of Fire, which chooses one candidate from each school. Harry's name is mysteriously entered into the cup and he is chosen as a 4th candidate, despite being underage and there already being a Hogwarts contestant, Cedric Diggory. Unfortunately, once the Goblet chooses a name, the contestant must compete, so there is nothing that anyone can do about it. Harry is scorned by the whole school (even Ron) as they all assume he somehow managed to enter his own name into the Goblet. After succeeding in every task, while facing near-death, Harry becomes a hero among his peers once more. In the final task, a maze with the Triwizard Cup in the centre (the first contestant to touch it being the winner). Cedric and Harry both touch the cup at the same time, with unexpected and tragic results.

I was terribly disappointed with this movie. There was just so much missing or changed from the book. Perhaps I watched it too soon (literally a day or 2) after finishing the book, but I felt totally cheated. 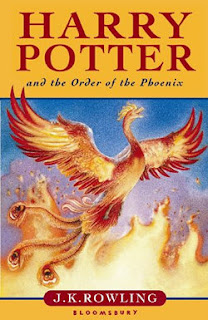 Harry Potter & the Order of the Phoenix


I found this book pretty long. I enjoyed the read, and it wasn't lacking in adventure or excitement. But I found Harry's attitude and mood-swings (while understandable and justifiable in the end) to be extremely annoying. Professor Umbridge is vile and I hated her! I especially hate that she gives fuzzy pink clothes, doilies, and kittens a bad reputation! This book also features an emotional death.

So in this 5th book of the series, Harry, Ron, and Hermione learn about The Order of the Phoenix which is an underground group of wizards who fought Voldemort's Death Eaters the first time, and who are now preparing for Voldemort's return, and protecting Harry. When the trio return to Hogwarts, they meet their new Defense Against the Dark Arts teacher to be a Ministry employee called Dolores Umbridge. She's a very unimposing-looking woman, dressed in pink, but she is the Ministry's poster-woman, and the very essence of evil. By having a woman on the inside, the Ministry now has "control" of Hogwarts, and Defense Against the Dark Arts becomes "no defense" as the Ministry only wants the students to be taught theory, "No wands!" Professor Umbridge imposes hundreds of rules to try to keep the students under control, but Harry and his friends form their own underground group. They meet in the Room of Requirement, call themselves Dumbledore's Army, and Harry is their Defense Against the Dark Arts teacher. A portion of Dumbledore's Army find themselves eventually find themselves sneaking in to the Ministry of Magic on a mission to save Sirius Black, and Harry finds a prophesy about him and Voldemort.

Again, this movie was missing so much from the book, it just felt like I was being cheated. I will have to watch it again someday, maybe when the books aren't so fresh in my mind, the movies will be better... 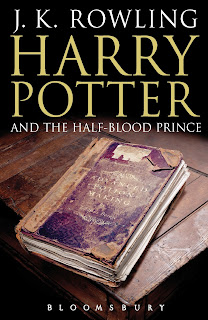 Harry Potter & the Half-Blood Prince
I could barely even handle the major murder at the end of this book (Dumbledore by Snape). I was shocked and angry and could not for the life of me figure out why J.K. Rowling would do such a thing!

The biggest plot point in this book is that, now in their 6th year at Hogwarts, Harry comes into possession of an old copy of their Potions book, completely scribbled through with spells and potions, and inscribed as belonging to the "Half-Blood Prince." Harry also has private lessons with Dumbledore, during which Dumbledore shares with Harry about Voldemort's past: who his parents were, how Dumbledore met him, and how he became the vile creature he is at present. Harry also learns about Horcruxes (a thing which possesses a part of a person's soul), and that Dumbledore believes Voldemort has 7, and 2 have already been destroyed, but they don't know what the rest may be, nor where they may be located. Dumbledore promises Harry that when he learns of the location of another Horcrux, he will bring Harry with him to find and destroy it. They do find one, but at a terrible price, and in the end, it is a fake. Dumbledore leaves Harry, Ron, and Hermione with the mission of finding & destroying the remaining Horcruxes. At the end of the book, Harry resolves to not return to Hogwarts the next year as he has a mission to fulfill.

Strike three with the movies. I think this one was marginally better than the previous two, but there were just annoying little changes, and always with the missing parts, and I just... *sigh* 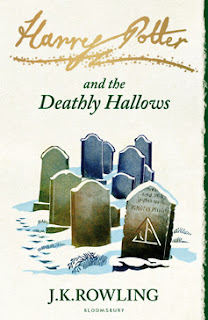 Harry Potter & the Deathly Hallows
Wow. That's pretty much all I can say to sum up this book, and the series as a whole. I'm so sad that it's over, and yet so much has happened, that I'm kind of happy to just let the characters be - they've been through so much! I thought my heart had broken at the end of The Half-Blood Prince, but as awful as that was, it was nothing in comparison to all the losses and deaths and revelations in this final book.

So, as we knew from the ending of The Half-Blood Prince, Harry, Ron, and Hermione do not return to Hogwarts for their 7th year, instead setting off to find and destroy Voldemort's remaining Horcruxes, which Dumbledore entrusted them with. The Order tries to help and protect them, but Harry and his friends insist that Dumbledore left them with the mission, and no-one else is to know about it. Right away in the first few chapters there are more deaths, one in particular that really made me mad, and injuries. It is at this point that Harry, Ron, and Hermione set off on their own on their secret mission. The wizarding world is in an uproar as Voldemort and his Death Eaters are in control of the Ministry and have infiltrated Hogwarts, so they have to take great measures to hide from everyone. They do find and destroy Horcruxes, and along the way also learn about the Hallows: 3 magical items that, when possessed by one person, make that person the strongest wizard and conqueror of death. Our friends get separated, caught, tortured, etc., escape again... The story climaxes when they return to Hogwarts to fight Voldemort and the Death Eaters in an epic battle of good vs. evil.

I haven't watched these movies yet. I thought I owned all of the movies, so I was really excited to have a little marathon last weekend after I finished the last book. But, come to find out, I only have The Deathly Hallows: Part 2. So, I am on the lookout for Part 1 for cheap, but if it takes too much longer I may have to break down and rent it and wait for someone to give it to me for birthday/Christmas. :)

So... that's the end of it, then. As I said in Part 1 of my reviews, I wouldn't have appreciated or enjoyed them at all as a kid when these books first came out, so I'm really glad I finally got around the reading these books because I've really enjoyed the journey. And I would highly recommend them to older children or teenagers who like fantasy, magic, and bravery. I am so excited that my younger nephew also started reading the books this year. I'm hoping that once he gets a little older and a little further into the series he'll want to geek out with me. :)
Posted by Anne-Marie at 9:30 AM