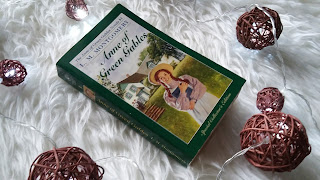 Oh Anne with an e! How I love you and your passionate, quirky, dreamy ways!

Sometimes it comes as a complete surprise to me when I realize that there are books I know all about, but have never actually read. This was one of them. I am very familiar with Anne of Green Gables. We had recordings of the TV mini-series at home that we would watch when I was younger; in college, there was a family who opened their doors to students nearly every weekend, beginning in October, to watch the mini-series and subsequent movie(s?); my mother had a box set of the first 3 books of the series that I always thought was so neat and liked to play with, even though I wasn't supposed to; I have been to PEI and to Avonlea village and the Green Gables house... I'm kind of a fan... but I had never actually read the books!

Then in the fall, when I made this realization, I came across the books at the thrift store for $1 (for the entire series, in box set!), and then a few weeks later, I found an online book club that planned to read the whole series in 2017 and I decided to join in! My mom is joining me on this adventure as well, or attempting to. She doesn't read nearly as much or as fast as I do, but even at her current pace, she should be able to finish the series this year if she wants to.


I remembered and anticipated most of the happenings in this first book from the TV show. Oh, how well Megan Follows played that spirited little redhead! I had not realized how many years were spanned in that first book - about six, I think! And, to be honest, I didn't really know that there were more books. At the end of my copy of Anne of Green Gables there is a little blurb about each of the next books and I really had no idea! It basically covers most of Anne's life!

Anyway, I don't really feel the need to say much more, except perhaps to recap some of Anne's more notorious antics: falling off the roof, smashing her slate over Gilbert's head, the hair dye incident, getting Diana drunk, nearly drowning in the river, and winning the award at Queen's but giving it up to be able to help out with the farm. 💚
Posted by Anne-Marie at 8:21 PM