Book Review: Vassa in the Night by Sarah Porter 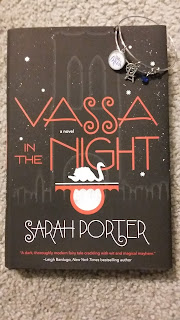 I'm not sure how I let this one slip by un-reviewed, seeing as it was one of my more recent reads, and I was sure I had written one...
Anyway, since I didn't, here I am. But since it has also been a while since I read it, things are not as clear in my mind and I may make some erroneous remarks about plot/characters.
Ok, so I received this book in the October "Once Upon a Dream" OwlCrate box. Overall, this was a pretty dark book. I kind of liked it, but I know a lot of people who didn't and who were completely turned off by the weirdness, to the point of not finishing the book, and I can totally understand that. Here's the synopsis:

In the enchanted kingdom of Brooklyn, the fashionable people put on cute shoes, go to parties in warehouses, drink on rooftops at sunset, and tell themselves they’ve arrived. A whole lot of Brooklyn is like that now—but not Vassa’s working-class neighborhood.

In Vassa’s neighborhood, where she lives with her stepmother and bickering stepsisters, one might stumble onto magic, but stumbling away again could become an issue. Babs Yagg, the owner of the local convenience store, has a policy of beheading shoplifters—and sometimes innocent shoppers as well. So when Vassa’s stepsister sends her out for light bulbs in the middle of night, she knows it could easily become a suicide mission.

But Vassa has a bit of luck hidden in her pocket, a gift from her dead mother. Erg is a tough-talking wooden doll with sticky fingers, a bottomless stomach, and a ferocious cunning. With Erg's help, Vassa just might be able to break the witch's curse and free her Brooklyn neighborhood. But Babs won't be playing fair...

The story is the retelling of Russian folklore about Vassilisa (which would be strange enough), and takes place in modern-day Brooklyn, but with weird, magical twists. It almost felt like a Cinderella retelling in the beginning, as Vassa lives with her stepmother and two stepsisters (one nice, one mean). But then the weird things start. To begin with, the nights in Brooklyn seem to last forever and keep getting longer. People can't explain it, but one hour of night seems like 2 or 3, so people don't really sleep because it's too long.

Nobody really shops at BY's: everyone is afraid of the store because (if you actually manage to get inside) shoplifters are beheaded, and their heads posted on stakes around the perimeter of the parking lot. Oh yes, we're talking gruesome. And the thing is, barely anybody makes it out alive because nearly everyone is accused of shoplifting. How is that possible, you may ask? Well that would be thanks to Babs' henchmen, two animated severed hands called Sinister and Dexter. They don't talk, obviously, because that would be too weird (yes, that was sarcasm). They do, however, communicate with Babs and with one another, and they work together to plant incriminating evidence on unsuspecting shoppers.

Vassa was encouraged by her mean stepsister to go to BY's to get lightbulbs because all of the lightbulbs in the apartment are missing/burned out. Knowing it is basically a death sentence, Vassa goes to BY's. She is caught supposedly shoplifting, but makes a deal with Babs to work at the store for three nights to work off her debt. Thus ensues the story and adventure to save her friends.

There's a lot of metaphors and hidden meanings that I'm sure I didn't even catch. There is a "motorcyclist" being held captive by Babs, who represents Night, one of the friends that Vassa tries to save, along with her doll Erg. But in order to save her human friend, Vassa has to learn some difficult truths and make a sacrifice to lose one of her other friends.

As I said, it's been a while, so I probably messed some of that up, but that's the overall gist of the story. I don't think that I would recommend the book to others, unless they were specifically looking for a weird, dark read.
Posted by Anne-Marie at 1:12 PM