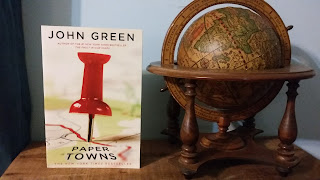 Paper Towns
I'm one of those people. Those people who have to read the book before they can watch the movie. I mean, maybe not every time. There are certainly movies I watched before reading the book, for one reason or another; either I wasn't aware that there was a book, or the opportunity to watch the movie came first, or I frankly, didn't care. This was one of those books that I read because I wanted to watch the movie, and already had (but had not yet read) the book. It's a YA fiction by John Green, a huge player in the YA world right now, after the wildly successful movie adaptation of his book The Fault in Our Stars (which I loved, both the book and the movie).

Paper Towns is a story about two teenage neighbours, Quentin and Margo. They were friends in childhood, but then life happened. She became one of the cool kids, and he didn't, but he's been keeping an eye on her and crushing hard all this time. Then one night, Margo knocks on his window needing help. They spend an amusing and adventurous night getting into trouble, exacting revenge on her enemies, and he is happy to think that she suddenly wants to be friends again. She, however, disappears the very next day. Everyone else just chocks it up to her acting out again. "She'll be back in a few days," they say. But Q is worried about her and does everything in his power to decrypt and put together the clues she left behind in order to find her.

I found that the plot was slow to develop in several areas. There were some suspenseful parts where you began to wonder what was really happening and whether Margo was really ok or not... But the ending was rather disappointing and unsatisfying. It's an OK read, I didn't hate it. As for the movie... just don't even waste your time with that one, in my opinion!
Posted by Anne-Marie at 10:00 AM