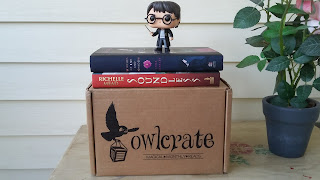 I haven't mentioned it here before, but for the past year or so I have been subscribing to OwlCrate, which is a super cool book-related monthly subscription box. Each month is a new theme, and each box contains one book related to the theme, as well as several book-related items, such as: candles, jewelry, socks, stickers, magnets, lip glosses, notebooks, etc! It's a bit expensive with the shipping, but it is so fun to get that little box of happy in the mail!! 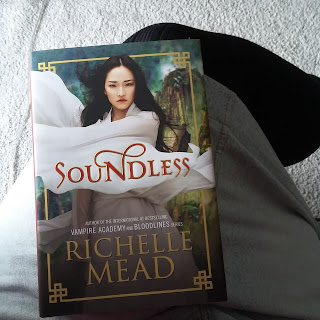 Soundless
I began my subscription in November 2015, and have ended up ordering 8 of the 10 boxes since then. The first box's theme was Myths & Legends and the book included in the box was Soundless by Richelle Mead. I had heard nothing of this book before, had never read any of Richelle's books (Vampire Academy & Bloodlines series) so when I got it I really didn't know what to think of it, and wasn't all that interested in it. I just added it to the ever-growing TBR pile in my room and forgot all about it. But in April, while looking for a new book to read, I happened upon it again and decided to give it a try. I was pleasantly surprised! This is a standalone YA science fiction/fantasy novel based on Chinese folklore. Fei lives in a silent world. Everyone she knows in her mountaintop village is deaf, and have always been deaf, for generations. They have learned to adapt, but things are getting worrisome when people start losing their sight as well, and their food source dwindles. And then suddenly, Fei can hear! Navigating through the world with new and overwhelming sense is an emotional ride for Fei, as she journeys off the mountaintop to the valley below in an effort to find answers. Answers to where their food source comes from and why it's stopping, and answers to why her village has no hearing and are now losing their sight. It was a really good read and I'm so glad I gave it a shot. I would definitely recommend it! 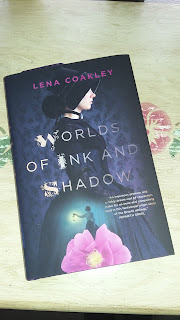 World of Ink and Shadow
*Spoiler Alert* The theme for Owl Crate's January box was Magic, which of course I couldn't resist! That was one of my favourite boxes because it included a Funko Pop vinyl figurine of a Harry Potter character, and I got Harry Potter, himself! The book in that box was Worlds of Ink and Shadows by Canadian author Lena Coakley. The cover art of this YA fantasy novel, as well as the whole premise of being a story about the Bronte siblings, had me intrigued from the start. It's the story of the 4 youngest Bronte siblings, Charlotte, Branwell, Emily, and Anne. Charlotte and Branwell write stories for their younger sisters, and at some point made a deal with the devil to allow them all to transport into their fantasy world. But when the stories & characters take over their lives, they no longer share their make-believe world with their sisters. This is fine for Anne, the sensible sister, but Emily (who fancies herself to be in love with one of the villains) craves that fantasy world. She convinces her older siblings to take them back, one last time. However, in the meantime, Emily has made her own deal with the devil, created her own fantasy world with her villain, and takes over her siblings' story. It's a bit strange and convoluted. The author tries to speculate on various true-to-life facts about the Brontes, which makes it kind of interesting from a historical point of view. I can't exactly explain why, but I didn't like the book as much as I thought I would. I would recommend it because there's no particular reason why I didn't like it, but it wasn't a favourite. 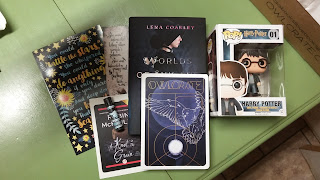 Are you an OwlCrate subscriber? Have you been reading the books, or are you like me, and just adding them to your TBR pile? Have you heard of read either of these books, and what's your take?

There are a few more OwlCrate books in my TBR pile that I'm hoping to get to before the end of the year, so hopefully you'll hear more about them soon!
Posted by Anne-Marie at 5:24 PM