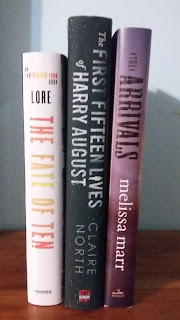 So, as promised, here is the first of a series of posts outlining the books I have read from January to August 2016. I didn't keep a record of the exact dates I finished each of these books, or how long they took me to read, so I'll just take my list and cover a few books per post. I will also try to add photos. These first ones aren't the best, but I'll try to make future ones Instagram-worthy. ;) 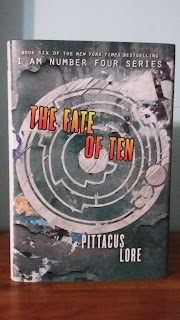 The Fate of Ten
{spoilers ahead if you haven't read the series}
At the beginning of the year, I was very much in the mood to finish off various series I had previously started and was getting weary of. Even though they are no longer my favourites, I feel the need to finish what I started. I was reading a couple at the same time, but only managed to finish The Fate of Ten by Pittacus Lore. It is the sixth book, released last September, in the Lorien Legacies series. I had been snatching the books up as soon as they were released until that point. But I wasn't really feeling the series anymore, so I didn't read this book until January. The seventh book, United As One was released this summer without much fanfare that I was made aware of. There is also a sub-series called The Lost Files which I never read.

As I mentioned, I really enjoyed the series in the beginning. It's a YA science fiction about a double alien invasion: the good guys (Loriens), whose planet was destroyed by the bad guys (Mogadorians). The nine Lorien elders sent their child-successors (called Garde) off to Earth with their trainer/guardians (Cepans) when their planet was attacked. They are all that's left of Lorien. Knowing that the Mogadorians would eventually find the children, the elders put a charm on them so that as long as they were separated they could only be killed in their numerical order, and the survivors all receive scars when the others are killed. At the beginning of the series, the first three have already been killed, and we meet Number Four (who goes by the name John Smith). As the series progresses, we slowly meet the other surviving Garde as they find each other. Once they came together the charm was broken, so now they are all fair game, so it is imperative that they all come together so that their Legacies (superpowers) are stronger.

This installment of the story picks up right where Revenge of Seven left off: the Mogadorians have officially invaded Earth and have New York City under attack, so some of the Garde are there fighting against the Mogs, while others are stranded in Mexico after finding the Sanctuary and awakening the Entity - the spirit of Lorien. Not much actually happens in this book to advance the story, except that we meet a few new characters, lots of Loriens get injured, and humans randomly become Garde.

That's really all I have to say about that. I'm glad I read it, because I do want to finish the series, but it wasn't great. 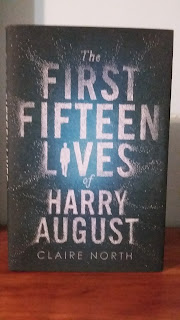 The First Fifteen Lives of Harry August
The First Fifteen Lives of Harry August by Claire North (a pseudonym of Catherine Webb) is another science fiction novel, which I absolutely loved! I believe I bought this one from Indigo merely because the title and cover caught my eye, and the synopsis was rather intriguing. It is a really interesting time travel/reincarnation story, which I always love.

Harry August keeps living the same life over and over, but he remembers everything from his past lives. At first this freaks him out, but eventually he finds others like himself and joins a community which helps him to adapt. As he progresses through his lives he is tasked with a mission, because of his special ability to remember everything, to help save the future of mankind. The time travel/living life over, is sometimes hard to get your head around, but I love that kind of mind bender. It's a great book and I highly recommend it, especially if you enjoyed Cloud Atlas and The Time Traveler's Wife. 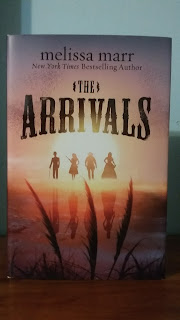 The Arrivals
The next book I read was The Arrivals by Melissa Marr. This one I actually found on a trip to a Dollar Tree store in Vermont last year. I always check the books at Dollar Tree because you never know what you'll find there, and they're only $1 - can't go wrong, right?! The title didn't really do anything for me, but the cover art was interesting and then I recognized the author (I read and loved her Wicked Lovely series, about faeries), so I thought, "This should be great!"

It's a "weird west" novel set in an alternate universe, which appears to be a lot like an old Western. Featuring vampires, monsters, demons, and an Egyptian Pharoah... Somehow, murderers get transported from our world to this alternate universe where they band together (allied with the vampires) to fight off the monsters and demons and attempt to keep peace in the land, all the while trying to figure out how to get back to our world. It was kind of fun, but it was weird, you guys. I wouldn't necessarily recommend it, unless you like that sort of thing.


Well, I think that's all for this post. Let me know if you've read any of these books and what your take on them was!
Posted by Anne-Marie at 10:00 AM