Unboxing: Once Upon a Dream

Hey guys! So I've decided to start sharing unboxings on my blog here, because I feel guilty about sharing them on Instagram for fear of spoiling for people who didn't receive it yet... and nobody reads my blog anyway. ;)

The theme for the October 2016 box was "Once Upon a Dream," which was already enticing enough for me. The additional hints OwlCrate gave us leading up to delivery were that a) the book would be a new YA release inspired by Russian folklore, b) there would be a never-before-included item from Whosits & Whatsits, b) there would be an exclusive piece of jewelry from The Geeky Cauldron, and c) items in the box would be inspired by Peter Pan, Sleeping Beauty, and the Wizard of Oz. Of course, with hints like these, and being a big fan of fairy tales, I of course had to buy this box! Some people really go out of their way to try to determine what the book will be each month. Myself, I don't keep up to date on new releases, so I really had no clue and didn't want to know! I like surprises! Unfortunately, there were a lot of spoilers this month on social media. I guess it's to be expected, but it kind of stinks for those of us who really enjoy the element of surprise.

So, here are the actual items, with terrible photos, and my opinion of them: 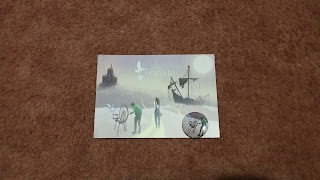 Monthly postcard and matching button
A few months ago, OwlCrate started producing collectible buttons which match the monthly postcard in the boxes - the one that describes what's in the box. The postcard image represents the theme. It was mentioned that items in the box were inspired by Sleeping Beauty, the Wizard of Oz, and Peter Pan, as well as the book being inspired by Russian folklore. So my interpretation of the image, then, is that we have a Dorothy-type girl following a sort of yellow-brick road toward a big gothic castle. Near her is a boy wearing green (Peter Pan?) touching a spinning wheel (Sleeping Beauty), and a little fairy (Tinkerbell?). To the other side is a shipwreck... this either represents the Russian folklore, or perhaps also Peter Pan... So, I haven't decided yet what I will be doing with the collectible buttons. I thought about maybe just sticking them in my bulletin board... For now they are in their respective boxes...


Paperclip Bookmark
These adorable paperclip bookmarks from My Heart My Tribe are super cute! The postcard says there were many different fabric designs used, and so far I haven't seen two the same. Mine is a mint green with tiny roses on it - so me! I've never actually used a paperclip for a bookmark before, I would be afraid of denting the pages. But even if I don't use it as a bookmark, it's a super cute clip I could use in my agenda or just to prettify some ordinary documents. :)
There was also a promotional bookmark for a series called The New World. I don't really like this kind of promotional material, but those are the bookmarks I actually end up using, because I don't want to use the really pretty ones. 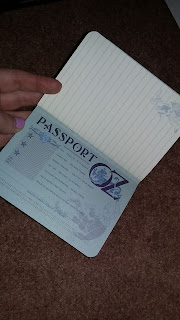 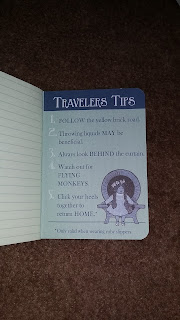 The Wizard of Oz inspired item
I love this little Oz Passport from The Unemployed Philosopher's Guild. It's just a notebook, but it has some really great Oz details. The front cover art has an awesome image of the Emerald City with yellow brick road leading up to it; the back cover has the quote "There's no place like home." I find this particularly appropriate for a passport. Inside the front cover is a real-looking ID page, just like you would find in an actual passport. I just love the Traveler's Tips printed on the inside back cover, so cute! Oh, and every page has a little image of our friends the Cowardly Lion, Scarecrow, and Tin Man. 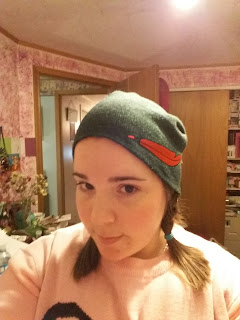 The Peter Pan inspired item
This was the never-before-included item - a beanie from Whosits & Whatsits! Beanies or toques really aren't my style and rarely look good on me, and this one appears to be a slouchy design, which I can never make look right... But I think I'll hang onto it for now. It's a dark green knit with a red feather embroidered on the side. 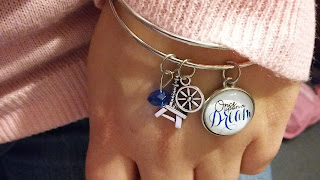 The Sleeping Beauty inspired item
This exclusive bracelet from The Geeky Cauldron is by far my most favourite item from this month's box, and possibly of all OwlCrate boxes I've ever purchased (apart from the Funko figurines). It's gorgeous! This Sleeping Beauty inspired bracelet features a lovely silver adjustable bangle with three charms: a spinning wheel, a sapphire crystal, and a quote charm which says "Once upon a dream," which totally makes the bracelet. I love, love, love it! I've worn it twice already.
Beware, the quote charm nearly came off the second time I wore it! Luckily the bracelet was inside my sleeve while shopping at the mall, so I felt the charm sliding around in my sleeve and was able to retrieve and reattach it. I never would have found it if it had fallen out! How sad would that have been?! 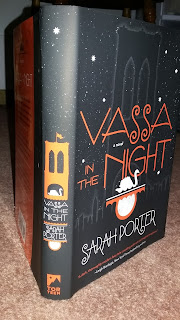 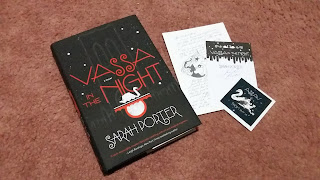 Russian folklore inspired new YA release
The book included in this month's box was.... Vassa in the Night by Sarah Porter! I had seen the cover posted to the OwlCrate Society page earlier in the month, but hadn't looked into it at all. There was also a letter from the author, signed bookplate, and Vassa in the Night tattoo. The synopsis from Goodreads is as follows:


In the enchanted kingdom of Brooklyn, the fashionable people put on cute shoes, go to parties in warehouses, drink on rooftops at sunset, and tell themselves they’ve arrived. A whole lot of Brooklyn is like that now—but not Vassa’s working-class neighborhood.
In Vassa’s neighborhood, where she lives with her stepmother and bickering stepsisters, one might stumble onto magic, but stumbling out again could become an issue. Babs Yagg, the owner of the local convenience store, has a policy of beheading shoplifters—and sometimes innocent shoppers as well. So when Vassa’s stepsister sends her out for light bulbs in the middle of night, she knows it could easily become a suicide mission.
But Vassa has a bit of luck hidden in her pocket, a gift from her dead mother. Erg is a tough-talking wooden doll with sticky fingers, a bottomless stomach, and a ferocious cunning. With Erg’s help, Vassa just might be able to break the witch’s curse and free her Brooklyn neighborhood. But Babs won’t be playing fair…

I like the cover: the colours and the magical night-time theme remind me so much of The Night Circus, which has got to be one of my top 5 favourite books of all time. So I was pretty excited about this book and decided to start reading it right away. I've just finished it and it's different. I liked it, but it's definitely not for everyone.

And that wraps up this month's OwlCrate unboxing! This was definitely one of my favourite boxes so far!

Earlier in the month there was a five-day photo challenge contest on Facebook & Instagram. One photo is picked from each site for each day's prompt. The prompts require you to have bought the previous month's box. The ten winners win a free OwlCrate box, and one of my photos on Instagram won! I had the choice to either have my October box refunded, or get a free November box. After finding out the theme of the November box, which is "Wonderland," I decided that since I had already paid for the October box, I'd take the November box for free! Yay! This also meant that I could try a different subscription box in November, and it just so happens that Loot Crate has partnered with J. K. Rowling's The Wizarding World to create a really fantastic box (you'll get it if you look up the box). The original batch of boxes sold out really quickly, so I added my name to the waiting list, and managed to buy one in the second batch, which has also sold out. I'm really excited for it! It's going to be a bi-monthly box, but I don't think I'll be able to afford any more, unless they're really especially spectacular (and then I'll have to take that instead of OwlCrate... tough call!). It cost me quite a bit more than I was anticipating, but I have very high expectations. I will happily share an unboxing of that as well, when it comes in December!!

Let me know what you thought of my October OwlCrate unboxing. Which were your favourite items, or which items do you wish you could buy for yourself?
Posted by Anne-Marie at 10:44 AM