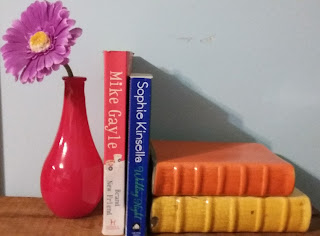 I have been trying to review the books I previously read this year, before starting up the blog again, so this is a continuation of that. I decided to review these two books together as they were both quick, romantic, fluff reads. 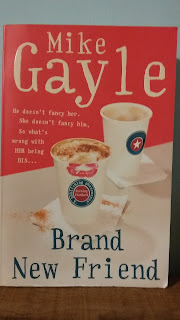 When Rob's girlfriend asks him to leave London and live with her in Manchester not only will it mean moving cities, it'll also mean leaving behind his best mate in the entire world. Believing that love conquers all and convinced of his ability to make new friends, Rob takes the plunge.

Six months in, and yet to find so much as a regular drinking buddy, Rob realises that sometimes making friends in your thirties can be the hardest thing to do. With drastic action needed, his girlfriend puts an ad in the classifieds for him. Three excruciatingly embarrassing "bloke dates" later, Rob begins to truly despair. Until his luck changes . . .

There's just one problem. Apart from knowing less than nothing about music trivia, football, and the vital statistics of supermodels, Rob's new friend has one huge flaw . . .


Brand New Friend is one of those stories that, if made into a movie, would be your typical rom-com, along the same lines as Made of Honor and Just Friends. It's a fun little adventure that explores the relationships between men and women, and asks us the question, Can men and women truly just be friends? The triangle between Rob & Jo & Rob's girlfriend is as cringe-worthy as one would expect. Because he thinks she would overreact, Rob lies-by-omission to mislead his girlfriend into thinking that his new friend Jo is a man. He also misleads Jo into thinking that his girlfriend knows all about her and is totally fine with the situation. Awkward humour follows...

I enjoyed this book, it was a fun sort of fluff read. It's a bit longer, I think, than a typical girly book, but not too long. The story progressed at a fairly comfortable rate. It was funny and awkward and sweet. I give it 3.5/5. 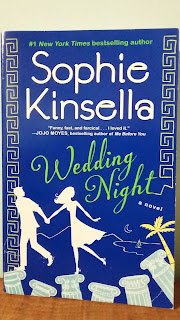 Lottie just knows that her boyfriend is going to propose, but then his big question involves a trip abroad—not a trip down the aisle. Completely crushed, Lottie reconnects with an old flame, and they decide to take drastic action. No dates, no moving in together, they’ll just get married... right now. Her sister, Fliss, thinks Lottie is making a terrible mistake, and will do anything to stop her. But Lottie is determined to say “I do,” for better, or for worse.


I went through a phase several years ago where I read a whole bunch of Shopaholic books, and then collected as many other books by Sophie Kinsella (as well as Madeleine Wickham) as I could get my hands on. But nowadays I can only read Sophie Kinsella's books in small doses, and I really must be in the right frame of mind. Wedding Night was an amusing fluff read, but there's just something about her characters that annoy me. That being said, I did like the book and all the silly shenanigans the characters get up to.

Fliss is the responsible sister. With a career and raising a young son on her own, she also manages to find time to look out for (and clean up after) her younger sister Lottie. Lottie is the carefree, flighty, happy-go-lucky sister. They didn't have an easy childhood, but Fliss always made sure that Lottie was happy and cared for. And Fliss feels like she can predict Lottie's next moves, because she always does the same things. So when Lottie's boyfriend doesn't propose when she's just sure he is, Fliss is completely prepared for the meltdown and the rebound hunt. What she isn't prepared for is for Lottie to make a promise of celibacy and accept a marriage proposal from a near stranger! Hilarity ensues as Fliss tries to stop her sister's wedding, and above all, prevent its consummation!

As I mentioned, there's something about Sophie Kinsella's characters that annoys me; maybe it's how completely air-headed they are, or the fact they're not very believable. But they are almost always amusing, and make for a quick, funny read. I give this one 3.5/5 as well.
Posted by Anne-Marie at 10:00 AM