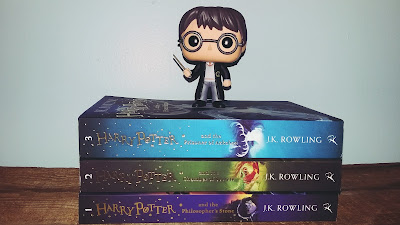 So my plan to review the books I read before reviving my blog before reviewing the books I've read since... it's not working out. But here goes a continuation...

I believe I've mentioned it already, but I started reading the Harry Potter series this year, for the first time. It's magical and beautiful and exciting, and I love it. I sort of regret not reading them as a kid and getting into it from the start... But had I tried to read them, I know I wouldn't have liked them - I just wasn't really into that kind of story at that point in my life.

Anyway, because I'm running behind on the reviews, I've decided to review the books together in a two-part post. I haven't finished the series yet, so I won't be posting part two for a while.

Also, I'll try not to give too much away, but seeing as I'm reviewing the whole series, there may be spoilers - fair warning! 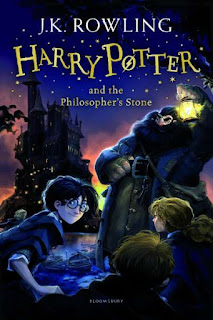 Harry Potter & the Philosopher's Stone
This is where the magic begins. Harry Potter, a mistreated, orphaned boy, discovers on his 11th birthday that he is a wizard and gets swept off to Hogwarts School of Witchcraft and Wizardry, where he meets his best friends Ron Weasley, Hermione Granger, and Rubeus Hagrid, and learns all about this hidden world he's never known anything about. He also learns about his past, and Voldemort, the dark wizard who was responsible for the deaths of his parents, as well as the lightning bolt scar on his forehead. In this first adventure, Harry single-handedly saves the Philosopher's Stone (which has the capacity to grant the owner/user immortality) from Voldemort.

I had seen the movie years ago and thought it was cute. I recently acquired my own copy, which I watched again after reading the book, and it was even better than I had remembered. It is a really great interpretation of the book. 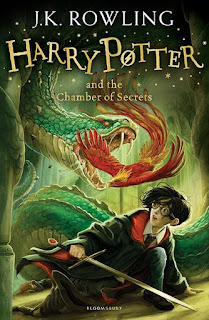 Harry Potter & the Chamber of Secrets
In this second adventure, Harry and Ron are astonished to discover they've somehow missed the Hogwarts Train, and so they steal Mr. Weasley's charmed Ford Anglia, which they end up crashing into the Whomping Willow. Strange things continue to happen... mysterious, cryptic words begin appearing on walls of the school (messages about the "Heir of Slytherin" and the "Chamber of ecrets"), and people are being found "petrified." There is, of course, suspicion that Harry might be the Heir when it is discovered that he is a parsel-tongue (one who is able to communicate with snakes), and there is fear that the school may have to be closed for the safety of the students. Harry and his friends investigate the attacks, which leads to Harry finding the Chamber of Secrets in order to save Ginny Weasley (Ron's younger sister) from a basilisk.

I waited to watch this movie until after I had read the book. As with the first movie, I found it entertaining and to be another fairly good interpretation of the book. 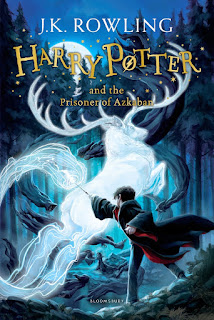 Harry Potter & the Prisoner of Azkaban
At the beginning of Harry's third year at Hogwarts, we find out that the wizard Sirius Black (believed to be one of Voldemort's followers, a mass-murderer, and responsible for the deaths of Harry's parents) has escaped from the high security magical prison called Azkaban, and everyone believes he is coming after Harry Potter. Dementors (the dark creatures who guard Azkaban) follow the Hogwarts Express and surround the school, terrifying students in their search for Black. But no-one is more affected by the Dementors than Harry, causing the new Defense Against the Dark Arts teacher (Remus Lupin) to help him learn how to defend himself against them by mastering a very advanced charm. Black does find Harry, but he's not what Harry was expecting.

This movie was also pretty great. I found that it remained pretty true to the book.

You can find Part 2 here, where I review the last 4 books of the series. Thanks for reading!
Posted by Anne-Marie at 10:00 AM