So May was kind of crazy. I don't even know why, there's just so much that went on, and the weather kept switching back and forth between spring and summer, and just... I don't know! I've been feeling a bit frazzled. Well, I guess I always kind of do at the end of the month (it's a busier time for me at work), but I don't know, there's something about May that made me feel extra strung out.

Anyway! Over the course of the month of May I finished/read 9 books! I'm pretty sure that's a record for me! To be fair, 3 of them were pretty small, but they're still books and I read them! 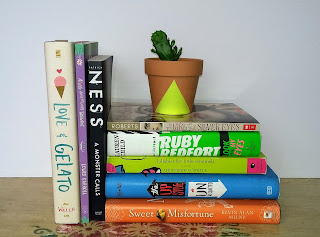 Kindred Spirits by Rainbow Rowell (eBook, not pictured)
About a girl and Star Wars, to be very vague. I don't know if it's actually considered a short story or not. It's really not very long. It's cute, and you kind of want it to be longer so you know a bit more about what happens, but it's probably just perfect the way it is.

Ruby Redfort: Look Into My Eyes by Lauren Child (Dollar Tree)
Ruby Redfort is a 13-year-old spy/detective/code-breaker. A nice little blend of Harriet the Spy and Flavia De Luce. The series is a spin-off from Lauren's illustrated children's series Clarice Bean (Clarice's idol is Ruby Redfort, the heroine of her favourite books). After lots of requests, Lauren finally wrote the series about Ruby. I would say these books are geared toward middle-school aged children. It was a cute story, but Ruby's catch phrases got on my nerves. Not sure what time period they are set in, I guess maybe '60s or 70's.

The Girl With the Silver Eyes by Willo Davis Roberts (rummage sale)
Another kind of cute story, definitely aimed at elementary or middle school-age. It's about this little girl with silver eyes who has special abilities. She discovers that it might be related to a medication her mother took while pregnant, and that there might be others like her, so she goes on a sort of quest to find the others.

Love & Gelato by Jenna Evans Welch
I loved this book! I don't typically enjoy YA romance because they are unrealistic and sickly sweet. This one was too, but I don't know... I just really liked it. It made me fall even more in love with Italy - I need to go there someday! The story is a sort of teen romance & self-discovery set in Italy.

Sweet Misfortune by Kevin Alan Milne (Dollar Tree)
I more or less enjoyed this story. It's about a deeply emotionally damaged chocolatier who must face her past in order to overcome her fears and begin to properly heal and truly open herself to love.

Alice's Adventures in Wonderland by Lewis Carroll (OwlCrate - exclusive cover)
I had never read Alice before, I don't know why?! This was such a great story, and definitely enjoyable for adults just as much as for children. I have always loved everything about Wonderland (based on the Disney movies) and was pleased to finally see how much was true to the books. Still need to get my hands on and read Alice Through the Looking Glass.

The Upside of Unrequited by Becky Albertalli (OwlCrate)
This is definitely not a typical read for me. I couldn't decide if I liked the writing or not. It is definitely aimed at a high school audience, and appeals to their rebellious natures, in my opinion. I might have enjoyed it more when I was in high school, I'm not sure. It was a cute story nonetheless - about twins who are polar opposites, and one gets a girlfriend and the other feels left behind. It was a fun read.

Lullabies for Little Criminals by Heather O'Neill
I'm not sure that anybody could honestly say they loved this book. It's heartbreaking and depressing, and yet still full of hope. There's also a few unanswered questions in the end. It's basically the story of a young girl struggling to grow up in the slums of Montreal with a druggie dad, eventually getting involved in drugs and prostitution. It's very moving. I suppose that it's set in the 70's, but I'm not sure.

A Monster Calls by Patrick Ness
Oh Em Gee. This book. I know now why people were making such a big deal out of this book when the movie was released some months ago! It's about a boy and a monster who helps him come to terms with his mom's illness and impending death. It's sad, it made me cry, but in a good way, if I can say that.

So, there you have it! It was an impressive reading month for me. I don't anticipate having another one like it before the end of the year, though! This month's reads bring my total up to 34 books read so far this year. I had adjusted my GoodReads goal to 45 in March (which means I have completed 76% of that goal), but I think I might just increase it again, to 52, and then see if I manage to go over that.

Well, that's all for now. Happy reading, I'll hopefully get a couple reviews posted over the next few weeks. *fingers crossed*
Posted by Anne-Marie at 12:56 PM