Book Review: Ever the Hunted by Erin Summerill 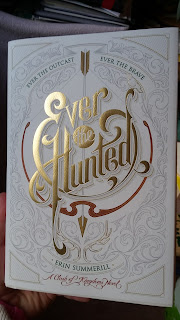 Ever the Hunted
by Erin Summerill

Source: I bought a hardcover copy

Seventeen year-old Britta Flannery is at ease only in the woods with her dagger and bow. She spends her days tracking criminals alongside her father, the legendary bounty hunter for the King of Malam—that is, until her father is murdered. Now outcast and alone and having no rights to her father’s land or inheritance, she seeks refuge where she feels most safe: the Ever Woods. When Britta is caught poaching by the royal guard, instead of facing the noose she is offered a deal: her freedom in exchange for her father’s killer.

However, it’s not so simple.

The alleged killer is none other than Cohen McKay, her father’s former apprentice. The only friend she’s ever known. The boy she once loved who broke her heart. She must go on a dangerous quest in a world of warring kingdoms, mad kings, and dark magic to find the real killer. But Britta wields more power than she knows. And soon she will learn what has always made her different will make her a daunting and dangerous force.


Review:
It's been a little while since I read this one, so this is going to be a pretty short review, unfortunately. Unless you prefer short reviews, in which case, this will be right up your alley!

I really enjoyed this book. I've seen a lot of reviewers saying that they didn't like it because it was predictable, they didn't like the writing, the characters weren't well-developed, you name it. All I can say is that I suppose I must be a pretty simple person because I really don't analyse books to that degree. I very clearly either like or dislike a story, and it's usually leaning more on the positive side.

I liked Britta a lot. She seemed like a slightly less intense, but just as fierce, version of Katniss Everdeen (whom I also loved), and in a very different setting with a bit more magic and a lot less love-triangle.

I liked Cohen as well. Even though I wasn't really sure in the beginning whether he was guilty or not, I was immediately on his side. I felt that he was either innocent, or if he was guilty, he had a  very good reason.

I appreciated the magical elements in this book, and I'm really looking forward to the sequel to find out what else Britta can do, and what will happen next!