Carve the Mark
by Veronica Roth 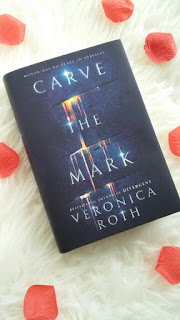 In a galaxy powered by the current, everyone has a gift.

Cyra is the sister of the brutal tyrant who rules the Shotet people. Cyra’s currentgift gives her pain and power — something her brother exploits, using her to torture his enemies. But Cyra is much more than just a blade in her brother’s hand: she is resilient, quick on her feet, and smarter than he knows.

Akos is the son of a farmer and an oracle from the frozen nation-planet of Thuvhe. Protected by his unusual currentgift, Akos is generous in spirit, and his loyalty to his family is limitless. Once Akos and his brother are captured by enemy Shotet soldiers, Akos is desperate to get this brother out alive — no matter what the cost.

Then Akos is thrust into Cyra's world, and the enmity between their countries and families seems insurmountable. Will they help each other to survive, or will they destroy one another?

*SPOILER WARNING*
This book was one of my most highly anticipated releases for 2017 and actually pre-ordered it (something I very, very rarely do!). It just sounded really good, and plus I had already really enjoyed Veronica's Divergent series so I was excited to read something else of hers. I'll admit that I got kind of nervous about it just before its release, with all the crazy hype and bad reviews it was getting. But, in the end I decided that I would just go for it - read it for myself and make my own decision, and I'm glad I did.

So, this isn't a very in-depth review (TBH, none of my reviews are...), and, not to make excuses, but that's mostly because it's been months since I read the book, many other plot-lines and characters have been introduced to my mind since, so I honestly can't remember everything that happened, and I tend to write these reviews away from home and my books, so I can't even grab my copy to flip back through. I have just been reading books too quickly lately to be able to keep up with the reviews. Which, I guess, is a good problem to have!? Anyway...
It took me a few chapters to get into the story. Part of the issue for me was the pronunciation of the names, but the author had made some videos in which she explained how to pronounce some of the more frequently used names, so finding those helped me get into it a bit more.

I liked Cyra's character, but I think really Akos was my favourite. I really liked Cyra's intensity and sense of rightness & justice... but Akos' loyalty and kindness won me over. I hated Cyra's brother and the way he used her, but it was kind of necessary for her character to become what she was. I also really liked the world. I tend to have difficulty picturing fantasy worlds, and honestly this was no different, but what I was able to picture from the descriptions was fun and different and I liked it.

I quite enjoyed the story, I found it intriguing and captivating, and I honestly couldn't see what the fuss was all about - but please, don't try to enlighten me. I've read some of the reviews and their claims, and I just can't agree with them based on what I read, which is still ok, right? It's still ok for people to have differing opinions? Sometimes I wonder... The only thing I was really disappointed about was that it's not a standalone, and so I have to wait ages for the sequel. Not cool. There should be a warning on new books, stating that they are first in a series/trilogy/duology/whatever so that we can prepare ourselves!