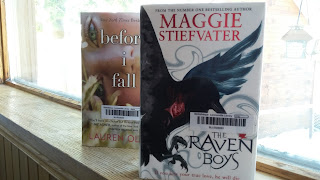 The Raven Boys
by Maggie Stiefvater


Source: Borrowed from the library (paperback)

“There are only two reasons a non-seer would see a spirit on St. Mark’s Eve,” Neeve said. “Either you’re his true love . . . or you killed him.”

It is freezing in the churchyard, even before the dead arrive.

Every year, Blue Sargent stands next to her clairvoyant mother as the soon-to-be dead walk past. Blue herself never sees them—not until this year, when a boy emerges from the dark and speaks directly to her.

His name is Gansey, and Blue soon discovers that he is a rich student at Aglionby, the local private school. Blue has a policy of staying away from Aglionby boys. Known as Raven Boys, they can only mean trouble.

But Blue is drawn to Gansey, in a way she can’t entirely explain. He has it all—family money, good looks, devoted friends—but he’s looking for much more than that. He is on a quest that has encompassed three other Raven Boys: Adam, the scholarship student who resents all the privilege around him; Ronan, the fierce soul who ranges from anger to despair; and Noah, the taciturn watcher of the four, who notices many things but says very little.

For as long as she can remember, Blue has been warned that she will cause her true love to die. She never thought this would be a problem. But now, as her life becomes caught up in the strange and sinister world of the Raven Boys, she’s not so sure anymore.

Review:
I really enjoyed reading this book! I mean I obviously expected to, otherwise I wouldn't have bothered picking it up. But if I'm honest, I really don't research books too much before I buy/read them. I don't always read the synopsis of a book - I like to be surprised. I mostly just base my reading decisions on whether or not others have recommended it, the cover art, and the title. Some people might consider that a terrible way to go about reading, but it hasn't really steered me wrong yet. I have read very few books that I really, honestly, didn't like!

So, as I was saying, I liked this book. As I started reading and putting pieces together, I wasn't entirely sure that I would like it, because I don't typically like stories about witchcraft/spiritualism or whatever. But it was presented in a very non-threatening way, and I just really liked it.

It's a ghost story, and quasi-love story, a story of betrayal, a coming-of-age/ self-discovery, adventure, magic, fast cars, talking trees... I mean... Once a story pulls all that together and talking trees? That's gold.

So Blue comes from a family of Seers. She doesn't have the Sight, her only (apparent) power is amplifying the powers of those around her. She has always been told that if she kisses her true love, he will die, and so she has not allowed herself to be interested in boys - especially the privileged boys at the nearby private boys' school, Aglionby.

All that changes when she finally sees one of the ghosts that her mother & aunts always claim to see. This one is a boy, one of the Raven boys from Aglionby. Her aunt tells her that if she can see him, it is either because he's her true love, or she will kill him. When Blue meets Gansey in person a short time later, she can't help but he drawn to him and his motley crew, and embarks on their mission to find the Raven King.

If you enjoy YA fiction and fantasy, I'm pretty sure you'll like this one. Highly recommended! Now I just need to get my hands on the other books (my library doesn't have them, and I can't seem to figure out the stupid inter-library loan system)...