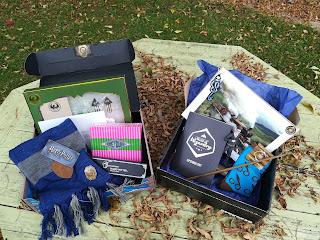 First, a little more information about these boxes: LootCrate is an American-based company. Their Harry Potter box, called J.K. Rowling's Wizarding World, is issued bi-monthly (every other month). They have several different themes of boxes, the Harry Potter one started last November (2016), and I have been subscribing since the beginning. They have a general theme for each issue, and each box contains 5-7 items, which usually includes a t-shirt. Items are licensed and exclusive. They do slip in some Fantastic Beast items as well. When you sign up, you choose which House you would like to be in, and any house-specific items will be for that House. LootCrate's box comes out to around $65 CAD ($51 USD), with shipping.

GeekGear is based out of the U.K. and they currently have two boxes: a generally geeky one. and Harry Potter/Fantastic Beasts. Their HP box is called World of Wizardry and it is issued monthly. I'm not sure how long they've been doing this box, but I first subscribed in August 2017. This box doesn't really have a monthly theme, but also contains 5-7 licensed & exclusive items, usually including a t-shirt. When you sign up, you can choose a House, or not - if you choose "Any," they will send you random House items when things are house-specific. GeekGear's box comes out to around $43 CAD ($33 USD), with shipping. 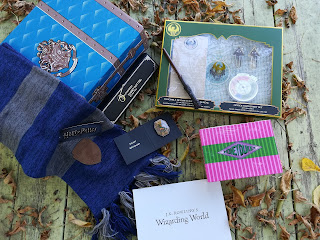 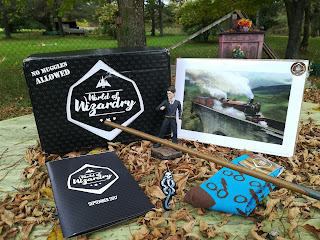 I like the items in the LootCrate boxes: this month's stationery set is right up my alley! And I love the scarf, I almost can't wait for cooler weather so I can wear it! ;) But the wand pens aren't really interesting to me, I find the pins over-sized and gaudy, and while I love the idea and the packaging of these erasers, they are pretty useless aren't they? If they had been actual candies I would have been much more excited. :P My favourite part of the box, actually, was the box itself: it is reversible and when you flip it inside-out it becomes a blue Hogwarts trunk - I just love that! :)

I find that the items in the GeekGear box are just a little bit nicer. I absolutely adore the t-shirt (and have worn it on several occasions, to be asked, "What's nifflin'?" haha!) and will definitely wear the socks. The figurine is admittedly pretty useless, but it is so detailed and lovely that I really can't say anything bad about it. The Hogwarts Express print, while I have no space to display it, is simply gorgeous. And Newt's wand, well... it's wonderful and I only wish it had a little stand or box for displaying (when I eventually get my room made over, I will have my wands displayed on my bookshelves :) ). The only item I really didn't like was the keychain. I don't love PVC keychains that much anyway (they get so grubby so easily), and I got the Death Mark one, which I kind of hate. I would have literally preferred any of the other designs.

So in general, I like both boxes, but I have to say my preference leans more toward GeekGear. It is less expensive, seems to contain more and better quality items, and I love the Fantastic Beasts franchise just as much as Harry Potter, so I appreciate that they include more items from that fandom (as I said, LootCrate does contain Fantastic Beasts items, but they haven't been all that memorable). Also, GeekGear's tees are way more comfortable and more fun, and you have way more sizes/styles to choose from!

Please let me know in the comments below if you would like to see more unboxing posts. I will try to do it more faithfully, if there is any amount of interest... I get OwlCrate just about every month, and will be getting both GeekGear and LootCrate again in November (maybe another comparison post?). I'd also like to try out some other boxes in the future, particularly FairyLoot and Unicorn Crate, which are both book boxes. I also saw an unboxing video last week for a Pusheen Cat box (not a book box), which sounds pretty awesome because I definitely love Pusheen Cat! I really enjoy the book boxes because, of course, I love books! But they always include other fun bookish items that I can usually use, and as much as I love new books, sometimes the bookish goodies are what I get more excited about. :)
Posted by Anne-Marie at 1:36 PM