Book Review: Of Fire and Stars by Audrey Coulthurst 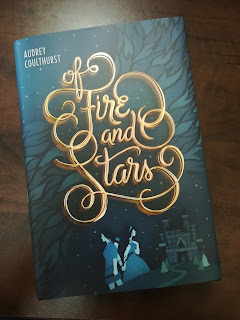 Of Fire and Stars
by Audrey Coulthurst

Betrothed since childhood to the prince of Mynaria, Princess Dennaleia has always known what her future holds. Her marriage will seal the alliance between Mynaria and her homeland, protecting her people from other hostile lands. But Denna has a secret. She possesses an Affinity for fire—a dangerous gift for the future queen of a kingdom where magic is forbidden.

Now, Denna must learn the ways of her new home while trying to hide her growing magic. To make matters worse, she must learn to ride Mynaria’s formidable warhorses—and her teacher is the person who intimidates her most, the prickly and unconventional Princess Amaranthine—called Mare—the sister of her betrothed.

When a shocking assassination leaves the kingdom reeling, Mare and Denna reluctantly join forces to search for the culprit. As the two become closer, Mare is surprised by Denna’s intelligence and bravery, while Denna is drawn to Mare’s independent streak. And soon their friendship is threatening to blossom into something more.

But with dangerous conflict brewing that makes the alliance more important than ever, acting on their feelings could be deadly. Forced to choose between their duty and their hearts, Mare and Denna must find a way to save their kingdoms—and each other.﻿


I really couldn't tell if homosexuality was supposed to be  acceptable in this world, or not. I think that prevalence shouldn't be confused with acceptance. It was brought up a lot, mostly by Mare (who we understand to be bisexual), in the context of the liegemen's activities and her own trysts, yet it didn't seem to be acceptable, at least not for royals and noblemen. Denna's noblewoman friend's lover was not accepted by her family (I can't remember her name, but she was from a different country). Mare was the proverbial "black sheep," which I can't help but connect to her sexual orientation. Politics aside, the relationship between Denna and Mare felt forbidden. If homosexuality is so acceptable in this world, why would that be? While many other reviewers felt that this lesbian romance was the one redeeming element of this book, I would have to disagree. It's still the most interesting part, but I couldn't love their relationship. If you look at the overview of how things happened, it would appear to be a natural progression from dislike to friendship to more, but in the actual text and dialogue... It just felt kind of forced.
I didn't hate the story, and I wasn't exactly bored, but it definitely wasn't the most interesting book I have ever read. I wanted to like it. I had heard good reviews from other OwlCrate subscribers at the time we got the book. That, along with the fact that it had such potential and sounded so interesting makes it a real disappointment that it fell so flat. I think I will still hold firm to my 3 stars... for now.