Book Review: Daughter of the Pirate King by Tricia Levenseller 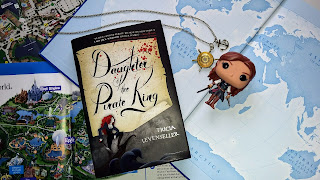 "There will be plenty of time for me to beat him soundly once I’ve gotten what I came for."

Sent on a mission to retrieve an ancient hidden map—the key to a legendary treasure trove—seventeen-year-old pirate captain Alosa deliberately allows herself to be captured by her enemies, giving her the perfect opportunity to search their ship.

More than a match for the ruthless pirate crew, Alosa has only one thing standing between her and the map: her captor, the unexpectedly clever and unfairly attractive first mate, Riden. But not to worry, for Alosa has a few tricks up her sleeve, and no lone pirate can stop the Daughter of the Pirate King.

This was such a fun adventure, and I'm really glad I finally got around to reading it! I only wish that I had read it sooner, and that I already had my hands on Book 2! By the way, this review contains spoilers. #fairwarning

The books that come in the OwlCrate box are not typically books that I would pick up on my own. But I was actually anticipating this one for a long time. I'm not exactly crazy about pirates, or mermaids, but generally speaking I do like stories about them. The cover is pretty, and the synopsis intriguing, so I was thrilled to received it in the box.

Alosa is probably my new favourite heroine. She seems a lot like Merida from Disney's Brave - a sassy, strong, independent woman who does her own thing. She's a badass pirate chick like Elizabeth Swann (Pirates of the Caribbean), and also just so happens to be part mermaid! One couldn't ask for a more interesting leading lady!

The story plot revolves around Princess Alosa, pirate in her own right, daughter of the Pirate King and an unknown siren, who is on a mission for her father to find a hidden treasure map on another pirate ship. She lets herself be captured and taken prisoner on said ship. The captain's brother and first mate, Riden, nominates himself as her keeper.

Alosa proceeds to baffle and frustrate her captors as she escapes her cell at night to search the ship. At one point Riden decides that in order to keep a closer eye on her, she'll just have to stay in his own quarters. Alosa determines that she might have some less-than-murderous feelings for the handsome first mate after all...

Overall Alosa's mission does not go as anticipated: she gets captured several times (sometimes on purpose, sometimes not) is forced to use her siren powers, and may or may not have fallen in love.

I cannot wait for the sequel of this book!