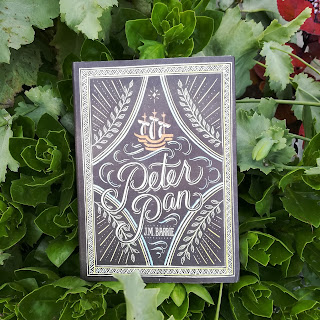 One starry night, Peter Pan and Tinker Bell lead the three Darling children over the rooftops of London and away to Neverland - the island where lost boys play, mermaids splash and fairies make mischief. But a villainous-looking gang of pirates lurk in the docks, led by the terrifying Captain James Hook. Magic and excitement are in the air, but if Captain Hook has his way, before long, someone will be walking the plank and swimming with the crocodiles...﻿

Every so often I go on a binge, buying and reading a bunch of classic books in a short period of time. This time around, it's been Classic Children's Literature. I have been reading quite a bit more middle-grade/kids' books this year, and several have been classics! And Peter Pan is, of course, one of them.

I have to admit that, as I was reading this story, I kept imagining scenes from the various Peter Pan movie adaptations I have grown to love: Disney's 1953 animated film Peter Pan, the 1991 movie Hook starring Robin Williams, and the 2003 live action film Peter Pan. I think the Disney animation is probably the closest to the book (although, it has been a long time since I've seen it...), but there are still some major differences. Of course, we know that most of the original fairytales were pretty violent and gruesome, and Disney has taken all that out to make them all pleasant with happy endings. Peter Pan is no exception: the book had much more violence than I was expecting. It is by no means gruesome, don't get me wrong, but let's just say it was darker than Disney had led me to believe.

I would not say with 100% certainty that, in this case, the book was better... Having seen and fallen in love with so many versions of Peter Pan, the original was somewhat of a disappointment. I think I will need to get my hands on J.M. Barrie's other Peter stories (particularly Peter Pan in Kensington Garden/The Little White Bird and Peter and Wendy) to see if my opinions of the original Peter change at all...

I've always felt a connection to the idea of Peter Pan; of everlasting childhood, never growing up, etc. Turning 30 just this past week has been especially difficult for me for this reason. Thirty sounds like such a grown-up age to me, and I just don't feel like it suits me... But actually, I've changed and grown so much, without even noticing most of the time...

But that's another story! Getting back to Peter... as I said, I've always felt a connection to those adaptations I've come to know and love, and the way that Peter is always portrayed, but the original Peter is not quite as wonderful (in my opinion) as his adaptations. This original Peter is manipulative, forgetful, vengeful, and childish (I mean, of course he is, but how old is he supposed to be? That's never been clear to me). He always has to be in charge, but is irresponsible, and can't tell the difference between fantasy and reality. The Peter Pan of my mind is playful and caring,

I am absolutely not the kind of person who analyzes the books I read, to find underlying themes and meanings. To me, a story is a story. I enjoy it for what it is at face value. Occasionally I come to discover some underlying ideas, but for the most part, books are what-you-see-is-what-you-get. That being said, as much as Peter Pan was a fun little adventure read, there certainly were some underlying tones of grief made obvious even to me. I would not dare to ever go in depth about that, but suffice it to say that, while I was entertained and amused, I was also left feeling sad, both because of events of the story and the tone. Not that the story has a sad ending, per se, but it's not exactly what I would call a happy ending either.

*This paragraph contains a potential spoiler*
I had never truly felt sorry for Wendy until reading this original story. Wendy, to me, was always just lucky to have been able to spend so much time with Peter Pan, and live out almost every little girl's dream of being a mother with actual children to play house with! But in truth, Wendy was spoiled, and she fell in love with the one boy she could never have. The ending, when Peter comes back to see her for the last time, broke my heart. It's a bit like Tuck Everlasting where the boy comes back for the girl, but she moved on without him. You sort of feel happy for her that she had a wonderful and fulfilled life, but you're sorry for him that he missed it and that they didn't spend it together. *sigh*

Well... I think that's about all I have to say about Peter Pan. This is a much wordier review than I am used to writing... I hope I haven't sounded like a moron.

I'd love to know your thoughts on the original Peter Pan, and how it compares to the Disney animation in your opinion!