Hi guys! I decided to try a different approach to book blogging for this post. I've seen some other bloggers format their review posts in this way and I like how concise and clean it is.﻿ 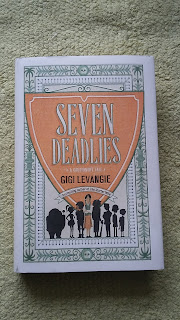 Source: I bought myself a copy
Synopsis:

Perry Gonzalez is not like the other kids in her Beverly Hills high school—a full-blooded Latina on a scholarship, living in a tiny apartment with her mother, she doesn’t have much in common with the spoiled, privileged kids who are chauffeured to school every morning. But Perry is a budding young writer with her sights set on Bennington—and her seven deadly stories are her ticket to the Ivory Tower. To pay her way, Perry’s been babysitting (correction: teenage-sitting) and tutoring the neighborhood kids, and she has seen the dark side of adolescence: lust for the “Judas Brothers” that leads to electrocution at a private birthday party concert; wrath that inspires new and perverse family bonds; and greed, in a young Bernie Madoff acolyte who conceives of a copycat Ponzi scheme involving his own grandmother.

Review:
What are my thoughts on this book? Well... I gave it three stars on Goodreads, so my thoughts are not terribly high. It was really the ending that ruined my opinion of the book and knocked it from four stars to three for me.

It starts out with young Perry Gonzalez introducing herself to the Admissions Committee of Bennington College. Even though she is not yet old enough to be applying to college, she felt the need to show how capable, and in need of an escape, she is. She proceeds to tell the tales of seven of her privileged schoolmates who she was charged with tutoring. Each chapter tells one of their tales, and is entitled with the Deadly Sin of which the featured child is guilty.

The stories are a bit fantastical and exaggerated, but entertaining. I viewed them as the title implies: cautionary tales. Fables. Parables. Allegories. Fictional stories with sometimes exaggerated events to warn us of the consequences of our actions. And it would have been perfect to just leave it at that...

However, the author chose to include two letters at the end of the book: one more from Perry to the Admissions Office, with an admission that makes you question her sanity, and the second from Perry's mother to the Admission Officer Perry has been in touch with. It's that last letter that ruined everything.

The tales were fun, and the book was a quick read. I didn't hate it, but I would have preferred if the last two letters hadn't been included, or if they had contained different information.