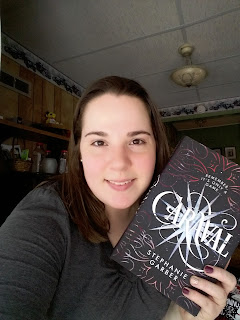 Source: I had pre-ordered a copy, and then received one in the February OwlCrate box.

Whatever you've heard about Caraval, it doesn't compare to the reality. It's more than just a game or a performance. It's the closest you'll ever find to magic in this world . . .

Welcome, welcome to Caraval―Stephanie Garber’s sweeping tale of two sisters who escape their ruthless father when they enter the dangerous intrigue of a legendary game.

Scarlett has never left the tiny island where she and her beloved sister, Tella, live with their powerful, and cruel, father. Now Scarlett’s father has arranged a marriage for her, and Scarlett thinks her dreams of seeing Caraval, the far-away, once-a-year performance where the audience participates in the show, are over.

But this year, Scarlett’s long-dreamt of invitation finally arrives. With the help of a mysterious sailor, Tella whisks Scarlett away to the show. Only, as soon as they arrive, Tella is kidnapped by Caraval’s mastermind organizer, Legend. It turns out that this season’s Caraval revolves around Tella, and whoever finds her first is the winner.

Scarlett has been told that everything that happens during Caraval is only an elaborate performance. But she nevertheless becomes enmeshed in a game of love, heartbreak, and magic with the other players in the game. And whether Caraval is real or not, she must find Tella before the five nights of the game are over, a dangerous domino effect of consequences is set off, and her sister disappears forever.

Review:
I fully expected to love this book from the moment I first heard of it, and I was not disappointed! I have read a few reviews of people saying they found the first half of the book really slow and uninteresting... I can maybe admit that the first 1/3 of the book is a bit slow. Mostly, though, I feel like the slow beginning was necessary to show us where Scarlett and Donatella were coming from, what brought them to Caraval. And I guess I could just appreciate the slow burn, because I knew this book was going to be amazing. It made sense for things to start out slow and gradually pick up pace as the game progressed. (But it's true that things really start to pick up and get interesting once Scarlett goes to the dress shop...). A book doesn't get that much hype, and get featured in several sub boxes, and pique my interest enough for me to pre-order, and not be worth every penny!
I loved how strange and quirky the world of Caraval was. The descriptions of the little shops and hidden passages and people, etc. reminded me very much of Alice in Wonderland/ Wizard of Oz, for some reason. I can't pinpoint exactly what it is about it that reminds me of The Night Circus, but there are definitely elements of that here as well. I was also strongly reminded of the old TV show Fantasy Island, because of the magical island owned/run by the mysterious Legend (Hello, Mr. Roarke!).
The characters were interesting. A lot of people complained about how annoying Scarlett was because she's always talking and complaining about the same things, but I really didn't see it that way. I liked Scarlett for her sense of loyalty and honour, and responsibility. I also enjoyed seeing her loosen up over the course of the story, fall in love, be more daring, and become her own person.
I enjoyed the evolution of the romance, and while the ending confused me, it certainly made me want to read the second book (next year!!). I think this would be an amazing movie or TV show someday, by the way. Just saying. Somebody should make that happen. As soon as possible.
Goodreads rating: