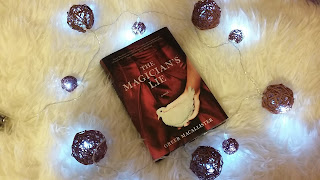 This was the book from my wish list which I received for Christmas from my parents.

I really liked this book, there was a lot of intrigue and mystery. I did find the development to be a bit slow, and the ending, while I had not completely anticipated the outcome, was a bit of a let-down. I enjoyed the book at the time, but having had some weeks to reflect, I've decided that it was a fun read, but it wasn't as amazing as I had anticipated.


The Amazing Arden had a charming childhood under the roof of her affluent maternal grandparents, until her mother decided to fall in love and run away, taking the young Ada with them. They moved into a country village with big romantic dreams, but their dreams were bigger than reality. Through unfortunate circumstances, Ada's new step-father moved them to his brother's farm where he would work, which meant that his nephew also lived with them most of the time, as he was a farm-hand. Ada's cousin had delusions of grandeur, he was obsessed with Ada, and he believed that he possessed magical healing powers. When Ada has an opportunity to apply to a prestigious dance school, the cousin goes to great lengths to sabotage and scare her. Once she is able, she runs away. After some time working in a big estate house, she finally ends up in New York. It is here that she starts her career as the Amazing Arden, when she joins a traveling magic show/circus, which she later inherits.

This story is told to us in bits, as Arden relays her story to ___, When we first met Arden in the beginning, it was through his eyes, at her final show. Following the show, the body of a man (presumed to be her husband) is found murdered, stuffed into a prop, and Arden has disappeared. When __ spots her on his way home, he grabs at the opportunity to catch this illustrious suspect. He takes her back to his small-town jailhouse to question her, and she proceeds to tell him her whole history.

It was an interesting and magical story, both the history and the "present." The resolution, however, I felt was a bit lacking. I would, however, still recommend it!