Whoops! I just came across this post and realized I never published it! I guess I was waiting to try to get some good pictures of the individual items. But seeing as I am now anticipating the December box and will be posting an unboxing of that soon enough, I thought I had better go ahead and publish this one! If you'd like to see photos of the individual items, just let me know!

Hey guys! I'm so excited to share this unboxing with you, it's one of my fave OwlCrate boxes so far! First off, the back story. I've been subscribed to OwlCrate for about a year now (have skipped a couple months). In September they started doing a Five Day Photo Challenge on Facebook and Instagram. A winner was chosen on each site, for each photo prompt, and the prizes were a free month's subscription, so that means ten free boxes! I participated in the September challenge and won (woot!), and decided to get my November box free since I wanted it anyway, and had already paid for the October box!

So, now that we know where the box came from, I have got to say that I love Alice in Wonderland, although, admittedly, I have never read the books (shame on me, I know!). The quirky characters, the dream-world, the magic, it all appeals to me, so I was very much anticipating this box, and I am pretty happy with it!

The hints we were given was that there was an exclusive tea blend from Riddle's Tea Shoppe, and an item from Authored Adornments, and everything is inspired by, obviously, Alice in Wonderland. Squeee! Now, let's see what's inside...

The first thing I saw upon opening the box, of course, was the reveal postcard, which I always set aside 'til later. Next I could see the tea tin. I obviously knew there would be tea in the box, and I don't like tea, so I knew I wasn't going to like that item. Last December there was tea from the same company and the smell was so strong and perfume-y I could hardly stand to have the unsealed tin in my room, and wouldn't dream of drinking the stuff, so I was pretty leery about this box for that reason... However, the tea actually smells quite pleasant and I may even be tempted to try it (but I know I won't like it, so why waste it? I'd like to sell it or give it away, but I really want to keep the tin...).

The next item was actually attached to the tea tin, which I didn't realize until I had finished unpacking the rest of the contents. It is a really cool Alice inspired magnet from Evie Bookish, which has the Cheshire cat's quote "Imagination is the only weapon in the war against reality." I love the art, and the quote, so I was really happy with that.

Next I found the clip bookmark from Authored Adornments, which has an Alice quote as well. I don't know if they're all the same or not, but mine quotes the part where Alice famously exclaims "Curiouser and curiouser!" :) It's beautiful, but I don't honestly use clip bookmarks. I find them a bit too bulky and top-heavy to be practical, but it really is beautiful. So I'm not sure what I'll do with it, other than perhaps use it as a photo prop...

Next I found the collectible pin which matches the reveal postcard, depicting Alice falling down the rabbit hole. I really love these collectible pins, but I still haven't found a use for them yet.

By now I had pulled the paper squiggles out to reveal the most beautiful and playful (exclusive) cover I've ever seen of Alice's Adventures in Wonderland, and matching bookmark, from Rock Paper Books. It's gorgeous! I'm fairly certain I have a copy of this book somewhere, but I don't know where so I can't say for certain. So I am super stoked to have a copy, and this one is just beautiful!

And, last but not least, the featured book was Heartless by Marissa Meyer, with another exclusive cover! I was pretty excited about this mostly because I have only recognized one other author that's been featured in the OwlCrate boxes, and so this is only the second book that I would have actually gone out and bought for myself. And I didn't realize that Heartless is a sort of retelling of Alice in Wonderland, in the sense that it's the story of how the Queen of Hearts became the person Alice met. (I wonder if it will be anything like the snippet of her story we got from last year's movie Alice Through the Looking Glass?) 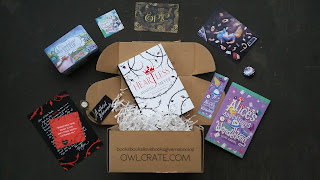 I can't say which item is my favourite, I really love them all.
Posted by Anne-Marie at 3:45 PM