Hello again reader(s). It's been a long time coming, but finally, another book review for you (and me)! :) Today I will be reviewing The Curious Charms of Arthur Pepper by Phaedra Patrick. I bought this book from Indigo-Chapters this past year. I picked it out because it sounded a lot like The Unlikely Pilgrimage of Harold Fry, which I really enjoyed. I kind of get a kick out of stories about older people discovering themselves late in life, taking adventures, having fun. It inspires me and gives me hope for my future. ;) 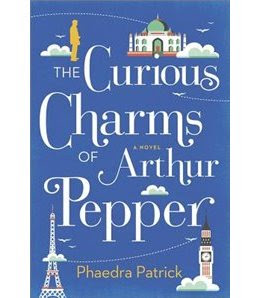 An eccentric yet absolutely lovable widower embarks on a life-changing journey to undercover the secrets his wife left behind, in this poignant and curiously charming novel.
Sixty-nine-year-old Arthur Pepper lives a simple life. He gets out of bed at precisely 7:30 a.m., just as he did when his wife, Miriam, was alive. He dresses in the same gray slacks and mustard sweater vest, waters his fern, Frederica, and heads out to his garden.

But on the one-year anniversary of Miriam’s death, something changes. Sorting through Miriam’s possessions, Arthur finds an exquisite gold charm bracelet he’s never seen before. What follows is a surprising and unforgettable odyssey that takes Arthur from London to Paris and as far as India in an epic quest to find out the truth about his wife’s secret life before they met—a journey that leads him to find hope, healing and self-discovery in the most unexpected places.

Featuring an unforgettable cast of characters with big hearts and irresistible flaws, The Curious Charms of Arthur Pepper is a joyous celebration of life’s infinite possibilities.

The Curious Charms of Arthur Pepper is a fun and adventurous read. It's about self discovery and learning to enjoy life. Arthur lives for routine. He has had the same daily routine for years, with only a few slight alterations over the last year since his wife, Miriam, passed away. On the anniversary of her death, he decides to do a little tidying up and get rid of some of Miriam's things which he wasn't ready to part with previously. In rummaging through her closet he discovers a box with a charm bracelet inside. It doesn't look like anything Miriam would have worn, the charms mean nothing to him, and yet who else could it have belonged to? Thus begins Arthur's journey.
One of the charms is an elephant with an emerald on it's back, with an international phone number engraved on the back. Curiosity gets the better of Arthur and he decides to call the number, regardless of what it might cost, to see if he might find some answers to this unfamiliar piece of jewelry. The number belongs to a home in India, and he speaks to a gentleman who did, indeed, know Miriam in the past, before she met and married Arthur. They have a very interesting conversation and the man extends an invitation to Arthur to come visit any time. Arthur, still in shock to have discovered that Miriam had a secret former life, now begins to look into the other charms and what they could mean.
Miriam and her charms lead him on a journey around the world, making new friends, breaking his routines and habits, learning new things, and discovering a whole new world. In the process, he learns things about Miriam he wishes he hadn't known and probably the reason she hid her past from him. He also mends his relationships with his children and neighbours, and becomes a completely different person.
It's a really heart-warming and inspiring story. I hope to lead the kind of life that Miriam led in her youth which will inspire someone else to change their way of life and discover a new world. Not the secrecy and "bad" things, but just the adventures, of course. :)