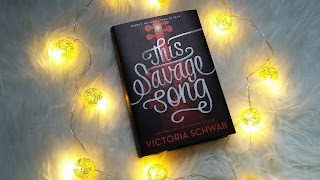 There’s no such thing as safe in a city at war, a city overrun with monsters. In this dark urban fantasy from author Victoria Schwab, a young woman and a young man must choose whether to become heroes or villains—and friends or enemies—with the future of their home at stake. The first of two books.

Kate Harker and August Flynn are the heirs to a divided city—a city where the violence has begun to breed actual monsters. All Kate wants is to be as ruthless as her father, who lets the monsters roam free and makes the humans pay for his protection. All August wants is to be human, as good-hearted as his own father, to play a bigger role in protecting the innocent—but he’s one of the monsters. One who can steal a soul with a simple strain of music. When the chance arises to keep an eye on Kate, who’s just been kicked out of her sixth boarding school and returned home, August jumps at it. But Kate discovers August’s secret, and after a failed assassination attempt the pair must flee for their lives.﻿

Review:
I wasn't too sure about this book in the beginning. The setting was a bit strange, and I just wasn't sure if I was on board with the whole monster thing. But I had heard some really amazing things about this book, and Victoria Schwab practically has a cult following among OwlCrate subscribers, so I persisted.

I ended up really liking this book. Usually in art, music is portrayed as a healing power. In this book, music is the weapon the monsters use to kill their victims (but generally, the "victims" are bad people who are in need of punishment), which was a refreshing difference.

It had a bit of a Romeo & Juliet vibe to it: forbidden love between two warring houses... I very much enjoyed the romance between Kate and August, their flight for their lives, and the unexpected twists. It was somewhat of a disappointment for me to discover that it is the first in a series, simply because this book was newly released in July 2016, so the second book won't be released until this summer (June 2017).

But I will be very anxious to get my hands on the next book, Our Dark Duet, to know where Kate and August end up, how the consequences of Kate's actions will follow up with her, etc.