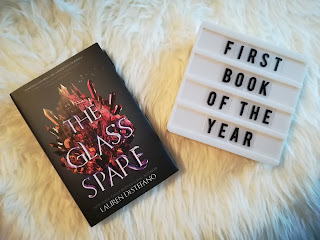 The Glass Spare
by Lauren DeStefano

Source: The November "Castles. Courts and Kingdoms" box from OwlCrate

Wilhelmina "Wil" Heidle is a princess, the apple of her mother's eye, and one of her father's best-kept secret weapons as a potential spy. Wil is the youngest of four, the beloved daughter after three sons, a spare who will never see the throne. Wil is close to two of her brothers: Owen (the heir), and Gerdie (the second youngest, and alchemist). Baron (second oldest, the first spare) is a despicable character, only loved by his mother, and even she fears him.
The story of Wil's birth is quite special. By all accounts she appeared to be cursed and should not have lived, but did. She looks nothing like the rest of her family, which makes her excellent spy material. She has a knack for fighting and undercover work (she often escapes the palace to find special ingredients for Gerdie's alchemy). Wil wants nothing more than to travel the world, and if being her father's spy (and thereby earning his approval) is the only way to do it, so be it.
But soon everything changes. Wil's life is threatened, and in her fight for her life, something inside her awakens. She suddenly has the ability to turn living things to "stone" when she is upset. Actually, gemstones. Emeralds, diamonds, rubies, etc.
After a series of unfortunate events, Wil's family now believes that she is dead, and she is on the run, trying to find a way to cure the curse, and save her kingdom.

I found this book to have a bit of a slow start. I mean, I was interested from the beginning, because, what a great premise!, but it wasn't quite able to hold my attention. This may have been due  to my own mindset at the time, as I was trying to finish the book in December as part of the Facebook group Life and Lit's Bingo reading challenge, which I guess was a bit too much stress. I decided to set it aside for a couple of weeks, and when I came back to it, things seemed to be a bit more interesting, and by the halfway point I was hooked.

I seem to have a real problem with fantasy world-building. It doesn't seem to matter what the world is, if it isn't the here and now, I tend to have a hard time picturing it. I found the world in this book to be rather confusing. On the one hand, it sounded medieval to me, King Arthur-esque. However, upon further research, I suppose it's meant to be more like King Midas' time period, which would be Ancient Greece (I honestly didn't remember this from history?). But the presence of modern technology (electricity, elevators...) really threw me off.
Aside from that, I really enjoyed the adventure, and the sort-of romance. I really like this idea of a cursed princess, I love the "Midas touch" aspect, and I appreciated that it wasn't all about the romance. I was really frustrated with the ending because it's what I consider a bit of a cliffhanger; Wil still hasn't found the cure for her curse, she has to go back to her kingdom to save someone's life, something tragic may have happened back in her kingdom but we don't know for sure, and we don't know what kind of deal she made with the Marveler, or what will be expected of her in the future after she returns... *sigh* I guess I'll just have to wait for the sequel!

Overall, I found it an interesting read, and I think I would recommend it to someone who likes fantasy. :)
My Goodreads rating: