The Virgin Cure
by Ami McKay 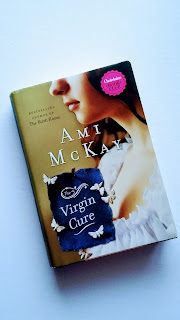 Source: I picked this book up at a used book sale, having recognized the author (I read The Birth House several years ago and remembered really liking it).

A little history: the idea of the virgin cure was started in 16th century Europe, and it was the belief that "deflowering" a virgin would cure a man of the mysterious diseases of the day (most likely all manner of sexually transmitted diseases).

The setting is Manhattan in 1871. It follows the story of Moth - a young gypsy girl. She remembers her father as a smiling face who one day just walked away and never returned. Her mother, a gypsy fortune-teller, spends the next several years waiting for him to return and barely scraping by. Moth spends her days roaming the streets and dreaming about getting out of her poor neighborhood.

When Moth turns twelve, her mother starts talking about the ads in the paper, of rich ladies looking for young girls as companions, and wouldn't that be a nice way to make a living? Not long after, she sells Moth to a rich lady called Mrs. Wentworth. Her mother wakes Moth up in the middle of the night, throws some things into a pillowcase for her, and hands her off to the rich lady without a second glance.

Moth is taken into the service of Mrs. Wentworth's household. Her life there is strange and abusive. Her duty is to be the lady's companion and servant - to keep her company, entertain her, dress her, and stay with her (reading, singing, etc) until she falls asleep. One of the other servants takes a shine to Moth and wants to help her escape, to go back home. They eventually succeed, but when she goes back to find her mother, her mother has left their apartment, leaving no forwarding address. Moth stays around for a while with a neighbor, but then decides to set off on her own.

She is "discovered" by a well-dressed young lady, who befriends her and tells her about the grand lady she lives with who takes care of young girls. She then takes Moth back with her to Miss Everett's house, to live there with four other girls. This is where she meets Dr. Sadie, a kind female physician who works with Miss Everett to ensure the health and safety of the girls she takes in. Dr. Sadie also feels compelled to save Moth and tries to convince her to leave Miss Everett and come live with her, but Moth has her own plans.

Miss Everett's house is essentially a high-class brothel specializing in clean, young virgins. The girls are given fancy dresses and a lovely home in exchange for entertaining Miss Everett's guests. They undress for the men, and if one decides he fancies one of the girls, he may then proceed to court her - taking her to the opera or theater, giving her expensive gifts, etc, and should he wish to "seal the deal," he will essentially buy the young lady from Miss Everett. Moth spots Mrs. Wentworth's husband among the prospective suitors, and when he shows an interest in her, she decides to use him to take out revenge on  his wife, while also taking advantage of him. Once her end of the deal is taken care of, Moth takes what is owed her and what she has earned (she kept a tally of everything that Miss Everett gave to her and their worth), and finally leaves Miss Everett's house for good.


I really liked Moth. She's a unique girl who feels like a little sister to me. I felt angry when she was repeatedly mistreated, pleased at her little pleasures, and happy when she finally found her freedom, even if it meant compromising herself. That was the only part of the book that made me really sad and the part I didn't like. I wished that Moth would have just gone with Dr. Sadie and avoided the whole sex situation. There's also a hint in the end that, while her mother was most likely not a real fortune-teller, Moth herself might actually possess some magic, which will be followed-up in the sequel Witches of New York, which was released last November. I'm really anxious to get my hands on that book now!
Posted by Anne-Marie at 10:00 AM